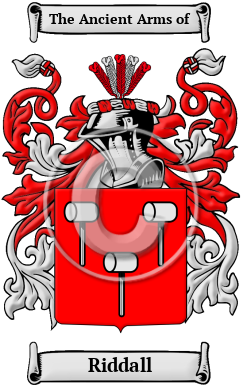 Early Origins of the Riddall family

The surname Riddall was first found in Belgium, where the name became noted for its many branches in the region, each house acquiring a status and influence which was envied by the princes of the region. Riddall is of Norman origin, the surname having been created from the personal name Ridel. The source of this personal name is somewhat uncertain: some scholars think it may come from the Old French word 'ridel,' which meant "small hill," others cite the Germanic word 'rid,' which meant "ride." The Normans, originally of Viking origin established their presence in Normandy in the 900s, and by the second half of the 11th century held present day Belgium, Holland, most of France, much of the British Isles, Southern Italy, and parts of Spain. Forms of this surname likely traveled amongst Norman controlled territories. The name was a baronial name in Aquitaine, France, where the first recorded instance of Riddall is of Gerard Riddell, Baron of Blaye, who was granted lands of the Abbey of Fons Dulcis near Bordeaux in circa 1030. One branch of the family possessed estates in Normandy in 1165. A Geoffry Ridel, recorded in Normandy in 1180 was later recorded in Scotland and received grants from King David I. The name is also known to have accompanied William I's Norman Conquest of England, which began in 1066. Bearers of Riddall were certainly a most influential family.

Early History of the Riddall family

This web page shows only a small excerpt of our Riddall research. Another 114 words (8 lines of text) covering the years 162 and 1628 are included under the topic Early Riddall History in all our PDF Extended History products and printed products wherever possible.

More information is included under the topic Early Riddall Notables in all our PDF Extended History products and printed products wherever possible.

Riddall migration to the United States +

Riddall Settlers in United States in the 17th Century

Riddall Settlers in United States in the 19th Century

Riddall Settlers in New Zealand in the 19th Century