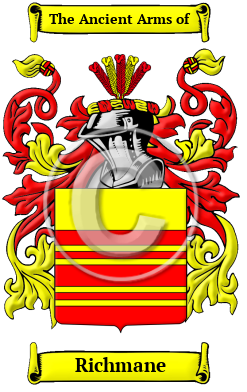 The name Richmane was brought to England by the Normans when they conquered the country in 1066. The ancestors of the Richmane family lived in Yorkshire, at Richmond. This local name indicated that its original bearer hailed from Richmond, a location which takes its name from the Norman personal name Richard, meaning brave and strong. Richmond (Richemont) was originally a place in the arrondissement of Neufchatel in Normandy. [1]

Early Origins of the Richmane family

The surname Richmane was first found in the North Riding of Yorkshire at Richmond, a borough, market-town, and parish. "The town and castle seem to have been founded in the reign of William the Conqueror, by his nephew Alan Rufus, upon whom he bestowed the whole district, with the title of Earl, and who gave the place the name of 'Rich Mount,' indicating, it is presumed, the value he attached to it. The district had previously belonged to the Saxon Earl Edwin, and the charter, for dispossessing him of his Yorkshire estates, and conferring them on Alan, was granted at the siege of York, in 1069. " [3] Richmond in Surrey was anciently Sheen and was renamed by Henry VII., on his building of a palace there after his own title of Earl of Richmond in Yorkshire. [1]

Early History of the Richmane family

It is only in the last few hundred years that the English language has been standardized. For that reason, Anglo-Norman surnames like Richmane are characterized by many spelling variations. Scribes and monks in the Middle Ages spelled names they sounded, so it is common to find several variations that refer to a single person. As the English language changed and incorporated elements of other European languages such as Norman French and Latin, even literate people regularly changed the spelling of their names. The variations of the name Richmane include Richmond, Richmond, Richman and others.

Outstanding amongst the family at this time was Christopher Richmond, High Sheriff of Cumberland in 1630. Thomas Richmond (1771-1837), was an English miniature-painter, the son of Thomas Richmond, originally of Bawtry, and of an old Yorkshire family. The father was a 'groom of the stables' to the Duke of Gloucester, and afterwards the proprietor of the Coach and Horses at Kew, where the artist was born in 1771. Though the pose of some of his figures is in the...
Another 79 words (6 lines of text) are included under the topic Early Richmane Notables in all our PDF Extended History products and printed products wherever possible.

Migration of the Richmane family to Ireland

Some of the Richmane family moved to Ireland, but this topic is not covered in this excerpt.
Another 60 words (4 lines of text) about their life in Ireland is included in all our PDF Extended History products and printed products wherever possible.

Migration of the Richmane family

Faced with the chaos present in England at that time, many English families looked towards the open frontiers of the New World with its opportunities to escape oppression and starvation. People migrated to North America, as well as Australia and Ireland in droves, paying exorbitant rates for passages in cramped, unsafe ships. Many of the settlers did not make the long passage alive, but those who did see the shores of North America were welcomed with great opportunity. Many of the families that came from England went on to make essential contributions to the emerging nations of Canada and the United States. Some of the first immigrants to cross the Atlantic and come to North America carried the name Richmane, or a variant listed above: John Richmond settled in Virginia in 1654 with Eleanor his wife; Adam, Henry, Jacob and William Richmond all arrived in Philadelphia between 1840 and 1870.