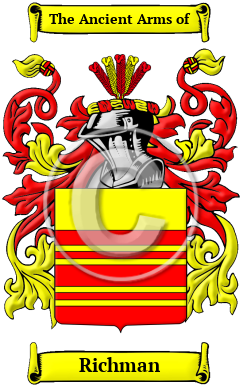 Richman is a name that was brought to England by the ancestors of the Richman family when they migrated to the region after the Norman Conquest in 1066. The Richman family lived in Yorkshire, at Richmond. This local name indicated that its original bearer hailed from Richmond, a location which takes its name from the Norman personal name Richard, meaning brave and strong. Richmond (Richemont) was originally a place in the arrondissement of Neufchatel in Normandy. [1]

Early Origins of the Richman family

The surname Richman was first found in the North Riding of Yorkshire at Richmond, a borough, market-town, and parish. "The town and castle seem to have been founded in the reign of William the Conqueror, by his nephew Alan Rufus, upon whom he bestowed the whole district, with the title of Earl, and who gave the place the name of 'Rich Mount,' indicating, it is presumed, the value he attached to it. The district had previously belonged to the Saxon Earl Edwin, and the charter, for dispossessing him of his Yorkshire estates, and conferring them on Alan, was granted at the siege of York, in 1069. " [3] Richmond in Surrey was anciently Sheen and was renamed by Henry VII., on his building of a palace there after his own title of Earl of Richmond in Yorkshire. [1]

Early History of the Richman family

Spelling variations in names were a common occurrence in the eras before English spelling was standardized a few hundred years ago. In the Middle Ages, even the literate regularly changed the spellings of their names as the English language incorporated elements of French, Latin, and other European languages. Many variations of the name Richman have been found, including Richmond, Richmond, Richman and others.

Outstanding amongst the family at this time was Christopher Richmond, High Sheriff of Cumberland in 1630. Thomas Richmond (1771-1837), was an English miniature-painter, the son of Thomas Richmond, originally of Bawtry, and of an old Yorkshire family. The father was a 'groom of the stables' to the Duke of Gloucester, and afterwards the proprietor of the Coach and Horses at Kew, where the artist was born in 1771. Though the pose of some of his figures is in the...
Another 79 words (6 lines of text) are included under the topic Early Richman Notables in all our PDF Extended History products and printed products wherever possible.

In the United States, the name Richman is the 5,435th most popular surname with an estimated 4,974 people with that name. [4]

Migration of the Richman family to Ireland

Some of the Richman family moved to Ireland, but this topic is not covered in this excerpt.
Another 60 words (4 lines of text) about their life in Ireland is included in all our PDF Extended History products and printed products wherever possible.

Richman migration to the United States +

For many English families, the social climate in England was oppressive and lacked opportunity for change. For such families, the shores of Ireland, Australia, and the New World beckoned. They left their homeland at great expense in ships that were overcrowded and full of disease. Many arrived after the long voyage sick, starving, and without a penny. But even those were greeted with greater opportunity than they could have experienced back home. Numerous English settlers who arrived in the United States and Canada at this time went on to make important contributions to the developing cultures of those countries. Many of those families went on to make significant contributions to the rapidly developing colonies in which they settled. Early North American records indicate many people bearing the name Richman were among those contributors:

Richman Settlers in United States in the 17th Century

Richman Settlers in United States in the 18th Century

Richman Settlers in United States in the 19th Century

Richman Settlers in Australia in the 19th Century