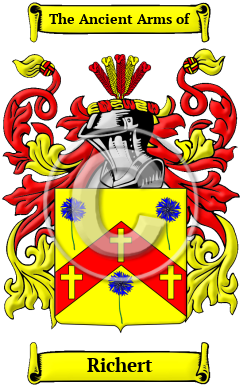 The prominent surname Richert originated in France, a country which has been a dominant presence in world affairs for centuries.The earliest forms of hereditary surnames in France were the patronymic surnames, which are derived from the father's given name, and metronymic surnames, which are derived from the mother's given name.The patronyms were derived from a variety of given names that were of many different origins. As well as the names of the saints of the Christian Church, many of the most common French surnames are derived from personal names of Germanic origin. They derive from the language of the Visigoths, who controlled France between the mid-5th and early 8th centuries. The name Richert is derived from the Old French name Richard, which is composed of the elements ric, meaning power, and hard, meaning hardy or brave.

Early Origins of the Richert family

The surname Richert was first found in Maine where they held a family seat in Breil, and were one of the main aristocratic families of this north-western province on the southern border of Normandy.

Early History of the Richert family

This web page shows only a small excerpt of our Richert research. Another 100 words (7 lines of text) covering the years 1500 and 1557 are included under the topic Early Richert History in all our PDF Extended History products and printed products wherever possible.

Notable amongst the family at this time was Antoine le Riche, a French composer, and colleague of Mouton as singer in the chapel of Louis XII, who reigned...
Another 27 words (2 lines of text) are included under the topic Early Richert Notables in all our PDF Extended History products and printed products wherever possible.

Richert migration to the United States +

Richert Settlers in United States in the 19th Century

Richert Settlers in United States in the 20th Century