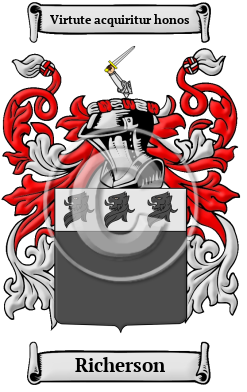 The name Richerson was brought to England in the great wave of migration following the Norman Conquest of 1066. It comes from the Old German name "Ricard," meaning "powerful" and "brave." [1]

Early Origins of the Richerson family

The surname Richerson was first found in Cheshire in 1067 where they were descended from Hugh d'Avranche, Earl Lupus of Chester. His descendant, William Belwood, Lord of Malpas in Cheshire, had two sons, David and Richard. Richard's grandson John was the first to bear the name Richardson.

Richerson is "essentially a north of England name, extending across the border into Dumfriesshire, and also, but to a less extent, characteristic of most of the east coast counties as far south as Kent and Sussex. The counties of Cumberland, Westmoreland, Durham, Northumberland, and the North and East Ridings of Yorkshire contain the greatest number of the name." [3]

Early History of the Richerson family

Notable amongst the family at this time was Dame Elizabeth Richardson, 1st Lady Cramond (1576-1651), English writer whose peerage was created for her in 1628; Sir Thomas Richardson (1569-1635), Chief Justice of the King's Bench; Thomas Richardson, 2nd Lord Cramond (1627-1674), an English politician who sat in the House of Commons from 1660 to 1674. Christopher Richardson (1618-1698), was an English nonconformist divine who appears to have been born at Sheriff Hutton, Yorkshire. Gabriel Richardson (died 1642), was...
Another 77 words (6 lines of text) are included under the topic Early Richerson Notables in all our PDF Extended History products and printed products wherever possible.

In the United States, the name Richerson is the 7,729th most popular surname with an estimated 2,487 people with that name. [4]

Migration of the Richerson family to Ireland

Some of the Richerson family moved to Ireland, but this topic is not covered in this excerpt.
Another 105 words (8 lines of text) about their life in Ireland is included in all our PDF Extended History products and printed products wherever possible.

Richerson migration to the United States +

Richerson Settlers in United States in the 17th Century