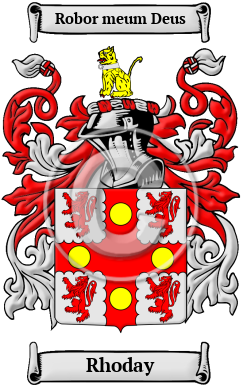 Rhoday is an ancient Norman name that arrived in England after the Norman Conquest of 1066. The Rhoday family lived in Lincolnshire at Rhoades, but more often than not, the name originates in the West Riding of Yorkshire. [1] The name literally means "dweller by the clearing(s)" from the Old English word "rod(u)." [2] As to confirm this meaning of the name, another source notes "a topographic name for someone who lived by a clearing in the woodland." [3] [4] Accordingly, one must dispel the rather obvious assumption that the name was derived from Rhodes, in the Mediterranean Sea. [5]

The Rhodes Scholarship is an international postgraduate award for students to study at the University of Oxford that was established in 1902, by English businessman and politician Cecil John Rhodes (1853-1902.)

Early Origins of the Rhoday family

The surname Rhoday was first found in Yorkshire. "Roads is a numerous Bucks [(Buckinghamshire)] name. There are hamlets and villages called Rhodes in Lancashire and the West Riding. A family named Rodes or De Rodes flourished for 500 or 600 years in Lincolnshire, Notts [(Nottinghamshire)], Yorkshire, and Derbyshire: they were descended from Gerard de Rodes, a distinguished Baron of the 12th century. " [1]

While we can find places named Rhodes in the United States, Australia and South Africa, we cannot find any in England today, nor can we find Rhoades in Lincolnshire. However, a second source notes the Yorkshire reference as follows: "This was a common Yorkshire entry, and explains the large number of Rhodes in the West Riding Directory." [6]

Early History of the Rhoday family

This web page shows only a small excerpt of our Rhoday research. Another 119 words (8 lines of text) covering the years 1591, 1550, 1674, 1668, 1663 and 1664 are included under the topic Early Rhoday History in all our PDF Extended History products and printed products wherever possible.

Norman surnames are characterized by a multitude of spelling variations. The frequent changes in surnames are largely due to the fact that the Old and Middle English languages lacked definite spelling rules. The introduction of Norman French to England, as well as the official court languages of Latin and French, also had pronounced influences on the spelling of surnames. Since medieval scribes and church officials recorded names as they sounded, rather than adhering to any specific spelling rules, it was common to find the same individual referred to with different spellings. The name has been spelled Rhodes, Rhoades, Rhode, Rhoads, Roades, Roads and others.

Outstanding amongst the family at this time was Hugh Rhodes (fl. 1550), an English author of the 'Book of Nurture,' 'born and bred in' Devonshire, a gentleman of the king's chapel. [7] John Rhoades, was an early American fur trader from New England, who was part of Jurriaen...
Another 47 words (3 lines of text) are included under the topic Early Rhoday Notables in all our PDF Extended History products and printed products wherever possible.

Migration of the Rhoday family

Many English families emigrated to North American colonies in order to escape the political chaos in Britain at this time. Unfortunately, many English families made the trip to the New World under extremely harsh conditions. Overcrowding on the ships caused the majority of the immigrants to arrive diseased, famished, and destitute from the long journey across the stormy Atlantic. Despite these hardships, many of the families prospered and went on to make invaluable contributions to the development of the cultures of the United States and Canada. Early North American immigration records have revealed a number of people bearing the name Rhoday or a variant listed above: John Rhode settled in Virginia with his wife and three children in 1709; along with Phillip and his wife and four children; John Rhodes settled in Maryland in 1774.