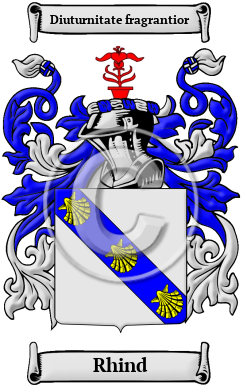 Early Origins of the Rhind family

The surname Rhind was first found in Perthshire, in the parish of Rhynd. "The name occurs in the Chartulary of Moray early in the XIII. century and it has been variously spelt Rhynd, Rhind, Rynd and Rind. It is doubtless territorial, and derived either from the parish of Rhynd, co. Perth, or from the estate of Rhind, in Fifeshire." [1]

As though to underline the same origin, another source notes: "this place, which derives its name, of Gaelic import, from its situation on a point of land at the confluence of the rivers Earn and Tay, was the resort of the celebrated Wallace, who, while meditating the deliverance of his country from a foreign yoke, was often obliged to take shelter among its woods and recesses." [2]

George Fraser Black in his Surnames of Scotland, explores the history and lineage in more detail. "From the parish of Rhynd in Perthshire. William de Rynd was a charter witness in Aberdeen, 1342. Although Rynd or Rhynd is now a somewhat rare name in Angus it is of considerable antiquity in that county. Rinds or Rynds figure in feuds with Ogilvies, Guthries, and other neighbors there. Murthacus (Murdoch) del Rynde had a gift from David II of four oxgates of land in the royal hunting forest of Plater and four oxgates of Casse in 1366. " [3]

Early History of the Rhind family

During the Middle Ages, there was no basic set of rules and scribes wrote according to sound. The correct spelling of Scottish names were further compromised after many haphazard translations from Gaelic to English and back. Spelling variations of the name Rhind include Rhind, Rhynd, Rind, Rynd, Rinds, Rynds, Rhinds and others.

More information is included under the topic Early Rhind Notables in all our PDF Extended History products and printed products wherever possible.

Migration of the Rhind family to Ireland

Some of the Rhind family moved to Ireland, but this topic is not covered in this excerpt. More information about their life in Ireland is included in all our PDF Extended History products and printed products wherever possible.

Rhind migration to the United States +

Scots left their country by the thousands to travel to Australia and North America. Desperate for freedom and an opportunity to fend for themselves, many paid huge fees and suffered under terrible conditions on long voyages. Still, for those who made the trip, freedom and opportunity awaited. In North America, many fought their old English oppressors in the American War of Independence. In recent years, Scottish heritage has been an increasingly important topic, as Clan societies and other organizations have renewed people's interest in their history. An examination of passenger and immigration lists shows many early settlers bearing the name of Rhind:

Rhind Settlers in United States in the 19th Century

Rhind Settlers in Australia in the 19th Century

Rhind Settlers in New Zealand in the 19th Century