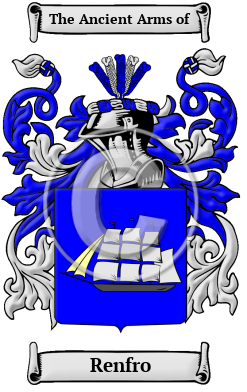 The Renfro surname is of local origin, derived from the town so called in Renfrewshire.

Early Origins of the Renfro family

The surname Renfro was first found in Renfrew, a parish, burgh, and market-town, in the Upper ward of Renfrewshire. [1] "This place appears to have derived its name and signifies "a point of land in the midst of the waters," from the situation of the ancient town near the conflux of the rivers Clyde and Gryfe, which, before they were confined to their present channels, almost surrounded its site; and the appellation was subsequently given to the parish, and also to the county. The origin of the town may be justly attributed to the family of the Stuarts, afterwards kings of Scotland, to whose ancestor, Walter, the adjacent territory was granted by David I., who appointed him steward of the royal household, and invested him with many honours. The town gradually rose up around the castle of Renfrew, which was erected on one of the numerous islands which at that time divided the channel of the Clyde, for the residence of the lord of the manor; and this isle, since the accession of the Stuarts to the crown, has been distinguished by the name of the King's Inch." [2]

Early History of the Renfro family

This web page shows only a small excerpt of our Renfro research. Another 78 words (6 lines of text) covering the years 1304, 1408, 1404 and 1772 are included under the topic Early Renfro History in all our PDF Extended History products and printed products wherever possible.

More information is included under the topic Early Renfro Notables in all our PDF Extended History products and printed products wherever possible.

In the United States, the name Renfro is the 3,121st most popular surname with an estimated 9,948 people with that name. [4]

Renfro migration to the United States +

Renfro Settlers in United States in the 19th Century

Renfro Settlers in United States in the 20th Century

Suggested Readings for the name Renfro +