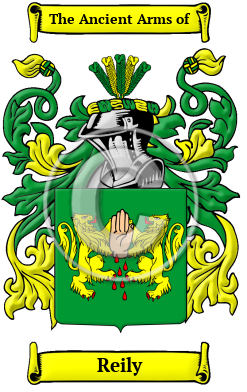 The Reily surname originally appeared in Gaelic as O Raghailligh, which means descendant of Raghallach.

Early Origins of the Reily family

The surname Reily was first found in County Cavan. They were known as the Princes of East Breffny, descended from Raghallaigh, Prince of Breffny in 981. They maintained their territory during the Anglo/Norman invasion of Strongbow, Earl of Pembroke, in 1172, but Sir John O'Reilly, Prince of Breffny surrendered the principality to Queen Elizabeth I thereby ensuring that his territories remained intact.

Early History of the Reily family

Within the archives researched, many different spelling variations of the surname Reily were found. These included One reason for the many variations is that scribes and church officials often spelled an individual's name as it sounded. This imprecise method often led to many versions. O'Reilly, O'Reilley, O'Reily, O'Rielly, O'Riely, O'Riley, O'Rilley, Reel and many more.

Notable amongst the family name at this time was Count John O'Reilly; Edmund O'Reilly (1598-1669), Roman Catholic Archbishop of Armagh; Hugh Reily (Reilly or O’Reilly) (c.1630-1695) Irish Member of Parliament for Cavan Borough in the Patriot Parliament of 1689; Philip Og O’Reilly (Gaelic was Phillip Óg O’Raghallaigh)(c.1640-1703), Irish...
Another 48 words (3 lines of text) are included under the topic Early Reily Notables in all our PDF Extended History products and printed products wherever possible.

In the United States, the name Reily is the 17,590th most popular surname with an estimated 2,487 people with that name. [1]

Reily migration to the United States +

The 19th century saw a great wave of Irish families leaving Ireland for the distant shores of North America and Australia. These families often left their homeland hungry, penniless, and destitute due to the policies of England. Those Irish immigrants that survived the long sea passage initially settled on the eastern seaboard of the continent. Some, however, moved north to a then infant Canada as United Empire Loyalists after ironically serving with the English in the American War of Independence. Others that remained in America later joined the westward migration in search of land. The greatest influx of Irish immigrants, though, came to North America during the Great Potato Famine of the late 1840s. Thousands left Ireland at this time for North America, and those who arrived were immediately put to work building railroads, coal mines, bridges, and canals. In fact, the foundations of today's powerful nations of the United States and Canada were to a larger degree built by the Irish. Archival documents indicate that members of the Reily family relocated to North American shores quite early:

Reily Settlers in United States in the 17th Century

Reily Settlers in United States in the 18th Century

Reily Settlers in United States in the 19th Century

Reily Settlers in United States in the 20th Century

Reily Settlers in Canada in the 18th Century

Reily Settlers in Canada in the 19th Century

Reily Settlers in Australia in the 19th Century

Reily Settlers in New Zealand in the 19th Century