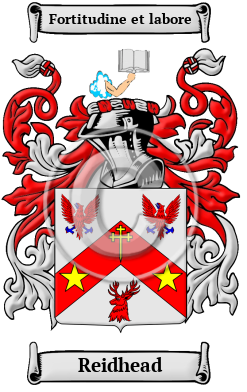 The origins of the Reidhead surname are uncertain. In some instances, it was no doubt derived from the Old English word "read," meaning "red," and was a nickname that came to be a surname. Either way, we may conclude that it meant "red-haired" or "ruddy complexioned." [1] [2]

To confuse matters more, there are also instances where the surname Reidhead is thought to be derived from one of various place names, such as Read in Lancashire, and Rede in Suffolk.

Early Origins of the Reidhead family

The surname Reidhead was first found in Aberdeenshire (Gaelic: Siorrachd Obar Dheathain), a historic county, and present day Council Area of Aberdeen, located in the Grampian region of northeastern Scotland where the name has been found since the 14th century. Ancient charters show the name as Rufus (Latinized,) records include an Ada Rufus who witnessed resignation of the lands of Ingilbristoun in 1204; and a William Rufus, who was a juror on an inquest on the lands of Padevinan in 1259. "Gilbert 'le Rede' of Coul was committed to prison and died there in 1296. Red is found as a surname in Aberdeen in 1317, and it is one of the oldest in the parish of Kildrummy. Patrick dictus Rede was on an assize at Rane in 1335, John Reed was collector of tithe in the deaneries of Stormonth and Atholl in 1362, and James Reed was bailie of the burgh of Stirling in 1364. Reeds were at one period a numerous Clan in Kyle. The first of the name there recorded is probably William Rede, son of John Reede. who had a confirmation of the lands and pertinents of Bairskemyn in Kyle in 1375. " [3]

For the purposes of Clan identification, the family name Reidhead is officially a sept of the Clan Robertson and as such is entitled to the Clan Badge and Crest of the Robertsons.

Early History of the Reidhead family

Spelling variations of this family name include: Ried, Reid, Read, Reed and others.

Migration of the Reidhead family to Ireland

Some of the Reidhead family moved to Ireland, but this topic is not covered in this excerpt.
Another 45 words (3 lines of text) about their life in Ireland is included in all our PDF Extended History products and printed products wherever possible.

Migration of the Reidhead family