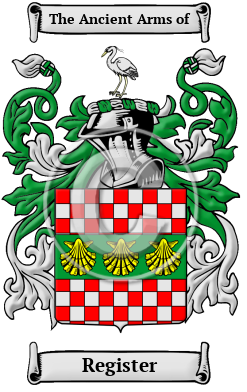 The ancestors of the name Register date back to the Anglo-Saxon tribes of Britain. The name is derived from when the Register family lived in the region of Rochester in Kent. Register is a topographic surname, which was given to a person who resided near a physical feature such as a hill, stream, church, or type of tree. Habitation names form the other broad category of surnames that were derived from place-names. They were derived from pre-existing names for towns, villages, parishes, or farmsteads. Other local names are derived from the names of houses, manors, estates, regions, and entire counties.

Early Origins of the Register family

The surname Register was first found in Kent where the name was first recorded by Bede (c. 730) under the names of Dorubrevi and Hrofoecoestre. The first reference refers to the Briton name that was derived from "duro" meaning "fortress" or "bridge" while the second reference is derived from the Old English word for "roof" [1].

Solomon de Rochester (died 1294) was an English "judge, was a native of Rochester, whence he took his name. His brother Gilbert held the living of Tong in Kent. Solomon took orders, and was apparently employed by Henry III in a legal capacity. In 1274 he was appointed justice in eyre for Middlesex, and in the following year for Worcestershire." [2]

Today Rochester is a town in Kent which dates back to before 43 AD, named Durobrivae by the Romans. Rochester Castle stands on grounds that have been fortified since the Roman arrival. The Norman keep that was built in 1127 still stands majestically today. Rochester is also a small village in Northumberland and Staffordshire. "This parish, anciently called Rocetter, or Roucestre, comprises about 2370 acres." [3]

Early History of the Register family

This web page shows only a small excerpt of our Register research. Another 80 words (6 lines of text) covering the years 1557, 1494 and 1557 are included under the topic Early Register History in all our PDF Extended History products and printed products wherever possible.

It is only in the last few hundred years that the English language has been standardized. For that reason, early Anglo-Saxon surnames like Register are characterized by many spelling variations. As the English language changed and incorporated elements of other European languages, even literate people changed the spelling of their names. The variations of the name Register include: Rochester, Roccester, Wrocester, Wrochester and others.

Notables of this surname at this time include: Sir Robert Rochester (c. 1494-1557), English comptroller of the household to Queen Mary, eldest of the three sons of John Rochester, by his wife...
Another 31 words (2 lines of text) are included under the topic Early Register Notables in all our PDF Extended History products and printed products wherever possible.

In the United States, the name Register is the 3,537th most popular surname with an estimated 7,461 people with that name. [4]

Register migration to the United States +

Many English families tired of political and religious strife left Britain for the new colonies in North America. Although the trip itself offered no relief - conditions on the ships were extremely cramped, and many travelers arrived diseased, starving, and destitute - these immigrants believed the opportunities that awaited them were worth the risks. Once in the colonies, many of the families did indeed prosper and, in turn, made significant contributions to the culture and economies of the growing colonies. An inquiry into the early roots of North American families has revealed a number of immigrants bearing the name Register or a variant listed above:

Register Settlers in United States in the 19th Century

Register Settlers in United States in the 20th Century

Register Settlers in Canada in the 18th Century

Historic Events for the Register family +

Suggested Readings for the name Register +