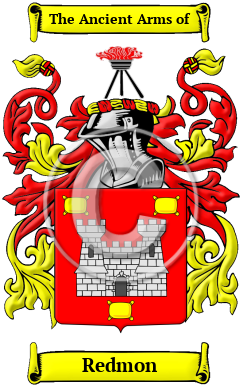 The Strongbownian invaders added their Norman conventions for surnames to the previously established Irish system for hereditary surnames. One of the most frequent forms of surnames for both cultures was the patronymic surname, which was formed from the name of the bearer's father or grandfather. The Norman tradition that the followers of Strongbow brought with them created such a surname through diminutive suffixes such as -ot, -et, -un, -in, or -el. Occasionally, two suffixes were combined to form a double diminutive, as in the combinations of -el-in, -el-ot, -in-ot, and -et-in. The Normans also formed patronymic surnames in a manner very similar to the Irish: they added a prefix to their father's name. These Anglo-Norman people, however, used the prefix Fitz-, which was derived from the French word fils, and ultimately from the Latin filius, which both mean son. Although this prefix probably originated in Flanders or Normandy, it can now only be found in Ireland. The surname Redmon is derived from the personal name Raymond, which is derived from the Old French forenames Raimund and Raimond. These are derived from the Old German personal name Raginmund, which literally means counsel-army or might-army. The Gaelic form of the surname Redmon is Réamonn.

Early Origins of the Redmon family

The surname Redmon was first found in County Wexford (Irish: Loch Garman), founded by Vikings as Waesfjord, and located in Southeastern Ireland, in the province of Leinster. Alexander Redmond, the first of this family who bore the surname was of the same stock as the Earl of Pembroke whom he accompanied to Ireland in 1170. [1]

While generally known today as an Irish family, we must take moment to explore the branch of the family that stayed in England, specifically at Yealand-Redmayne in Lancashire. " Anciently, Yealand-Conyers and Yealand-Redmayne appear to have formed one district. In the Testa de Neville it is stated, that 'Mathew de Redeman and Robert de Kemyers, or Cynyers, held the eighth part of a knight's fee in Yeland, of the fee of William de Lancaster, the king's tenant in chief;' hence the origin of the additions to the name. The Conyers and Redmayne families were long connected with Yealand." [2] [3]

Early History of the Redmon family

Notable amongst the family up to this time was Chevalier Gabriel Redmond who fought with distinction with the Irish Brigade in France; Dr John Redman (1499-1551), English churchman and academic, the first Master of Trinity College, Cambridge (1546-1551); Sir Richard Redman (or Redmayne) (died 1426), British...
Another 46 words (3 lines of text) are included under the topic Early Redmon Notables in all our PDF Extended History products and printed products wherever possible.

In the United States, the name Redmon is the 4,108th most popular surname with an estimated 7,461 people with that name. [4]

Redmon migration to the United States +

A great number of Irish families left their homeland in the late 18th century and throughout the 19th century, migrating to such far away lands as Australia and North America. The early settlers left after much planning and deliberation. They were generally well off but they desired a tract of land that they could farm solely for themselves. The great mass of immigrants to arrive on North American shores in the 1840s differed greatly from their predecessors because many of them were utterly destitute, selling all they had to gain a passage on a ship or having their way paid by a philanthropic society. These Irish people were trying to escape the aftermath of the Great Potato Famine: poverty, starvation, disease, and, for many, ultimately death. Those that arrived on North American shores were not warmly welcomed by the established population, but they were vital to the rapid development of the industry, agriculture, and infrastructure of the infant nations of the United States and what would become Canada. Early passenger and immigration lists reveal many Irish settlers bearing the name Redmon:

Redmon Settlers in United States in the 20th Century