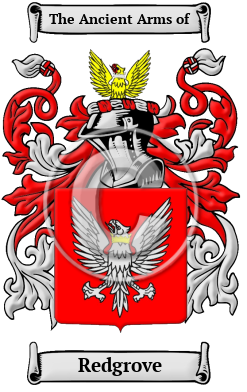 Redgrove is a name of ancient Anglo-Saxon origin and comes from the family once having lived at Redgrave, a village in the county of Suffolk. Redgrove is a topographic surname, which was given to a person who resided near a physical feature such as a hill, stream, church, or type of tree. In this case the place-name was originally derived from the Old English terms red meaning reed and graf meaning ditch or grove. Therefore the original bearer of the surname Redgrove lived in an area that was near a reedy grove or ditch.

Early Origins of the Redgrove family

The surname Redgrove was first found in Suffolk where they held a family seat from ancient times, as Lords of the manor of Redgrave, originally "Regrava," before the Norman Conquest by Duke William in 1066 A.D. At the time of the taking of the Domesday Book survey in 1086 A.D. the land was held by the Abbott of St. Edmunds who may have been a member or a scion of the family. At this time Redgrave was a large village with its own church, and the Domesday classification was, twelve beasts, thirty pigs, and thirty goats.

Early History of the Redgrove family

This web page shows only a small excerpt of our Redgrove research. Another 73 words (5 lines of text) covering the years 1344, 1477, and 1801 are included under the topic Early Redgrove History in all our PDF Extended History products and printed products wherever possible.

Sound was what guided spelling in the essentially pre-literate Middle Ages, so one person's name was often recorded under several variations during a single lifetime. Also, before the advent of the printing press and the first dictionaries, the English language was not standardized. Therefore, spelling variations were common, even among the names of the most literate people. Known variations of the Redgrove family name include Redgrove, Redgrave, Reedgrave, Reedgrove and others.

More information is included under the topic Early Redgrove Notables in all our PDF Extended History products and printed products wherever possible.

Redgrove Settlers in Australia in the 19th Century