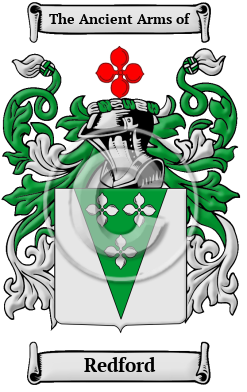 It was in the Scottish/English Borderlands that the Strathclyde-Briton people first used the ancient name Redford. It was a name for someone who lived in Midlothian. However, the Redford family name comes from any of several place names in England called Redford, from Old English re-ad meaning "red" and ford, meaning "a place where a river can be crossed."

Early Origins of the Redford family

The surname Redford was first found in Midlothian, where they held a family seat from early times and their first records appeared on the early census rolls taken by the early Kings of Scotland to determine the rate of taxation of their subjects.

Early History of the Redford family

This web page shows only a small excerpt of our Redford research. Another 115 words (8 lines of text) covering the years 1611, 1612, 1688, 1404, 1547 and 1535 are included under the topic Early Redford History in all our PDF Extended History products and printed products wherever possible.

Surnames that evolved in Scotland in the Middle Ages often appear under many spelling variations. These are due to the practice of spelling according to sound in the era before dictionaries had standardized the English language. Redford has appeared as Redford, Redfurd, Rudford, Reidford and others.

Notable amongst the family at this time was Sir Henry Redford (died 1404), English politician, Speaker of the House of Commons, who came of a family long settled in Lindsey, Lincolnshire; and John Redford (died 1547), a...
Another 36 words (3 lines of text) are included under the topic Early Redford Notables in all our PDF Extended History products and printed products wherever possible.

In the United States, the name Redford is the 9,513rd most popular surname with an estimated 2,487 people with that name. [1]

Redford migration to the United States +

Redford Settlers in United States in the 17th Century

Redford Settlers in United States in the 18th Century

Redford Settlers in United States in the 19th Century

Redford Settlers in Australia in the 19th Century