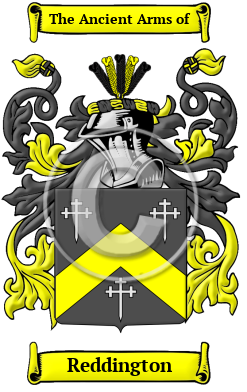 Early Origins of the Reddington family

The surname Reddington was first found in Lancashire where they held a family seat as Lords of the Manor of Wrightenton. The Saxon influence of English history diminished after the Battle of Hastings in 1066. The language of the courts was French for the next three centuries and the Norman ambience prevailed. But Saxon surnames survived and the family name was first referenced in the 13th century at Wrightington.

One of the first records of the family was John Rodington (died 1348), an English Franciscan, was probably a native of Ruddington, Nottinghamshire. He was educated at Oxford, where he graduated D.D., and at Paris. [1]

Early History of the Reddington family

Distinguished members of the family include John Redman (1499-1551), English Master of Trinity College, Cambridge; and Sir Richard Redman (died 1426), English politician, Speaker of the House of Commons, was son of Sir Matthew Redman of Levens, Westmorland. His father, probably a son of Sir Matthew Redman who sat for Westmorland in the parliaments of 1357 and 1358 and died in 1360. Richard Redman (died 1505), was Bishop of...
Another 68 words (5 lines of text) are included under the topic Early Reddington Notables in all our PDF Extended History products and printed products wherever possible.

In the United States, the name Reddington is the 16,761st most popular surname with an estimated 2,487 people with that name. [2]

Migration of the Reddington family to Ireland

Some of the Reddington family moved to Ireland, but this topic is not covered in this excerpt.
Another 60 words (4 lines of text) about their life in Ireland is included in all our PDF Extended History products and printed products wherever possible.

Reddington migration to the United States +

Reddington Settlers in United States in the 17th Century

Reddington Settlers in United States in the 19th Century

Reddington Settlers in Canada in the 19th Century