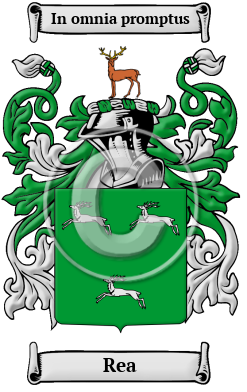 The ancestors of the Rea family lived among the Strathclyde-Briton people in the Scottish/English Borderlands. It is a name for a person known as a timid or shy person. Further research revealed that the name is derived from the Old English word ray, that referred to a roe or female deer. [1]

Early Origins of the Rea family

The surname Rea was first found in Cumberland at Gill, in the parish of Bromfield which belonged to the family from the time of William the Lion, king of Scotland (died 1214.) "Tradition says, that the original Ray was a faithful adherent of the Scottish monarch, by whom he was greatly esteemed, for his extraordinary swiftness of foot in pursuing the deer and who gave him the estate. The tenure was by a pepper-com rent, with the stipulation, that the name of William should be perpetuated in the family. This was strictly observed from generation to generation, until the latter half of the last [of the 18th] century, when the Mr. William Reay in possession gave to the ' hope of the house ' the name of John. " [1]

Thomas filius Ray witnessed confirmation by Alexander, son of Walter, of his father's gift to the church of Paisley in 1239. [2]

While there is no doubt of the family's origin in the north of England, the Hundredorum Rolls of 1273 list Reginald le Raye, in Oxfordshire; Nicholas le Ray in Suffolk; and Richard le Ray in Cambridgeshire. [3]

Early History of the Rea family

In Medieval times, spelling and translation were not nearly so highly developed as today. They were generally carried out according to the sound and intuition of the bearer. For that reason spelling variations are extremely common among early Scottish names. Rea has been spelled Rae, Rea, Ree, Ray and others.

Notable amongst the family at this time was William Rae (d. 1376) a 14th century Bishop of Glasgow. Centuries later, John Ray (1627-1705) was an English naturalist, who was one of the early botanical and zoological systematists, eponym of the fish named ray. James Rae (1671-1748), was a Scottish mechanic and historian, son of a clockmaker, born at Dumfries. He...
Another 58 words (4 lines of text) are included under the topic Early Rea Notables in all our PDF Extended History products and printed products wherever possible.

Migration of the Rea family to Ireland

Some of the Rea family moved to Ireland, but this topic is not covered in this excerpt.
Another 70 words (5 lines of text) about their life in Ireland is included in all our PDF Extended History products and printed products wherever possible.

Rea migration to the United States +

Rea Settlers in United States in the 18th Century

Rea Settlers in United States in the 19th Century

Rea Settlers in Canada in the 19th Century

Rea Settlers in Australia in the 19th Century

Rea Settlers in New Zealand in the 19th Century

Motto: In omnia promptus
Motto Translation: Ready for everything.

Suggested Readings for the name Rea +