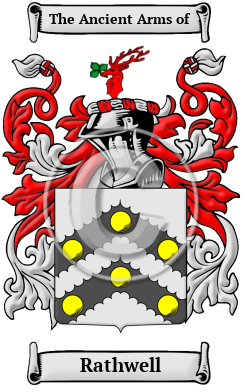 In ancient Anglo-Saxon England, the ancestors of the Rathwell surname lived in Rothwell, a place-name found in the counties of Lincolnshire, Northamptonshire, and the West Riding of Yorkshire. [1] The place-name Rothwell is derived from the Old English words roth, which means forest clearing, and wella, which means spring or stream. The place-name as a whole translates as "spring or stream in the summer clearing." [2] In the Domesday Book, [3] compiled in 1086, each of those places was originally listed as Rodewelle.

Early Origins of the Rathwell family

The surname Rathwell was first found in Lincolnshire where one of the first listings of the family was Robert de Rothewelle who was listed there in the Hundredorum Rolls of 1273. Later in the Yorkshire Poll Tax Rolls, Johanna de Rothewell and Johannes de Rothewell were listed. [1]

Early History of the Rathwell family

This web page shows only a small excerpt of our Rathwell research. Another 87 words (6 lines of text) covering the years 1563, 1627 and 1640 are included under the topic Early Rathwell History in all our PDF Extended History products and printed products wherever possible.

It is only in the last few hundred years that the English language has been standardized. For that reason, early Anglo-Saxon surnames like Rathwell are characterized by many spelling variations. As the English language changed and incorporated elements of other European languages, even literate people changed the spelling of their names. The variations of the name Rathwell include: Rothwell, Rathwell, Rosswell, Rosewell and others.

Distinguished members of the family include Richard Rothwell, the exorcist, who was born at Bolton (now in Greater Manchester) in 1563. [4] He died in 1627 and was "known as "Bold Rothwell, the Apostle of the North," and famed as an exorcist, who professed to have wonderful contests...
Another 48 words (3 lines of text) are included under the topic Early Rathwell Notables in all our PDF Extended History products and printed products wherever possible.

Migration of the Rathwell family to Ireland

Some of the Rathwell family moved to Ireland, but this topic is not covered in this excerpt.
Another 43 words (3 lines of text) about their life in Ireland is included in all our PDF Extended History products and printed products wherever possible.

Rathwell migration to the United States +

Many English families tired of political and religious strife left Britain for the new colonies in North America. Although the trip itself offered no relief - conditions on the ships were extremely cramped, and many travelers arrived diseased, starving, and destitute - these immigrants believed the opportunities that awaited them were worth the risks. Once in the colonies, many of the families did indeed prosper and, in turn, made significant contributions to the culture and economies of the growing colonies. An inquiry into the early roots of North American families has revealed a number of immigrants bearing the name Rathwell or a variant listed above:

Rathwell Settlers in United States in the 19th Century

Rathwell Settlers in United States in the 20th Century

Rathwell Settlers in Canada in the 20th Century

Rathwell Settlers in Australia in the 19th Century