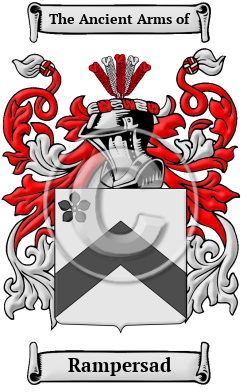 Early Origins of the Rampersad family

The surname Rampersad was first found in Derbyshire where they held a family seat as Lords of the Manor. The Saxon influence of English history diminished after the Battle of Hastings in 1066. The language of the courts was French for the next three centuries and the Norman ambience prevailed. But Saxon surnames survived and the family name was first referenced in the 13th century when they held estates in that shire.

Early History of the Rampersad family

Until quite recently, the English language has lacked a definite system of spelling rules. Consequently, Anglo-Saxon surnames are characterized by a multitude of spelling variations. Changes in Anglo-Saxon names were influenced by the evolution of the English language, as it incorporated elements of French, Latin, and other languages. Although Medieval scribes and church officials recorded names as they sounded, so it is common to find one person referred to by several different spellings of his surname, even the most literate people varied the spelling of their own names. Variations of the name Rampersad include Rempston, Rempson, Rempstone, Rempsen, Rempsan, Rempstan, Rempsun, Rampston, Rampson and many more.

Distinguished members of the family include Sir Thomas Rempston (Ramston) (died 1406), Constable of the Tower and an MP, Knight of the Shire for Nottinghamshire (1381), which he also represented in the parliaments of 1382, 1393, and 1395, served as Sheriff of Nottinghamshire (1393), made his way to France to join the earl (1399), one of the fifteen lances who embarked with Henry at Boulogne and landed at Ravenspur (1399), on a commission to inquire into treasons in London and the neighbourhood (1400), and shortly after appointed admiral of the fleet from the Thames eastwards, made a knight of the Garter...
Another 184 words (13 lines of text) are included under the topic Early Rampersad Notables in all our PDF Extended History products and printed products wherever possible.

Migration of the Rampersad family

Searching for a better life, many English families migrated to British colonies. Unfortunately, the majority of them traveled under extremely harsh conditions: overcrowding on the ships caused the majority of the immigrants to arrive diseased, famished, and destitute from the long journey across the ocean. For those families that arrived safely, modest prosperity was attainable, and many went on to make invaluable contributions to the development of the cultures of the new colonies. Research into the origins of individual families in North America revealed records of the immigration of a number of people bearing the name Rampersad or a variant listed above: the name represented in many forms and recorded from the mid 17th century in the great migration from Europe. Migrants settled in the eastern seaboard from Newfoundland, to Maine, to Virginia, the Carolinas, and to the islands..