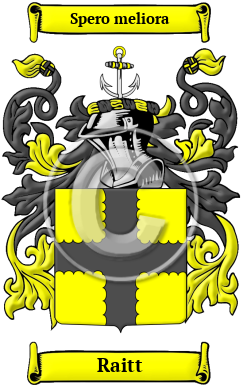 Early Origins of the Raitt family

The surname Raitt was first found in Nairnshire, where they were recorded as a family of great antiquity. They took their name from the Castle of Rait near Geddes which was in ruins by the 1400s. [1] Today Rait is a small village in Perth and Kinross. The Wraith variant is a Scottish Gaelic word for "ghost" or "spirit."

Early History of the Raitt family

Notable amongst the Clan at this time was Sir Gervase Rait Constable of Invernairn of Castle Rait. His younger brother Sir Andrew de Rait of Rait (born c.1280) was also a noble of note. He was Constable of Nairn Castle in 1296. He appears on the 1296 Ragman Roll giving homage to King Edward I of England. He succeeded to his brother's estates and titles...
Another 65 words (5 lines of text) are included under the topic Early Raitt Notables in all our PDF Extended History products and printed products wherever possible.

Raitt migration to the United States +

Raitt Settlers in United States in the 18th Century

Raitt Settlers in United States in the 19th Century

Raitt Settlers in New Zealand in the 19th Century