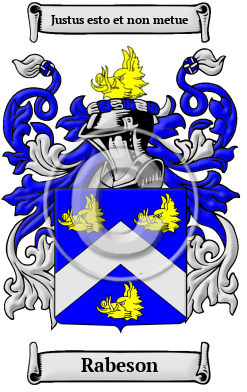 The Picts were the ancient Scottish tribe where the ancestors of the Rabeson family lived. The name Rabeson comes from the personal name Robert. This name is composed of the old English elements hroth, which means fame, and berht, which means bright. Although this Clan had the early appearance of being English, the Robsons were one of the four principal Clans of the North Tyne area just south of the Scottish Border in the sixteenth century. Their progenitor was Robert, the second son of George Gunn, the Crowner of Scotland. The Gunn Clan territories were in northern Scotland and they were of Norse origin together with their overlords, the Sinclairs.

Early Origins of the Rabeson family

The surname Rabeson was first found in Northumberland, where the name was quite distinct from both Robinson and Robertson, although in early records of the Clan the Robson name was frequently spelled Robison, literally Robi's son.

Early History of the Rabeson family

When the first dictionaries were invented in the last few hundred years, spelling gradually became standardized. Before that time, scribes spelled according to sound. Names were often recorded under different spelling variations every time they were written. Rabeson has been written Robson, Robison, Robeson, Robisonn and others.

Notable amongst the Clan at this time was Charles Robson (1598-1638), English divine, first chaplain at Aleppo, of Cumberland parentage, the son of Thomas Robson, master of the Free School of Carlisle. "Born in 1598, having entered Queen's College, Oxford, as batler at Easter 1613, he matriculated thence on 5 May 1615, aged 17. He graduated B.A...
Another 57 words (4 lines of text) are included under the topic Early Rabeson Notables in all our PDF Extended History products and printed products wherever possible.

Migration of the Rabeson family to Ireland

Some of the Rabeson family moved to Ireland, but this topic is not covered in this excerpt.
Another 58 words (4 lines of text) about their life in Ireland is included in all our PDF Extended History products and printed products wherever possible.

Migration of the Rabeson family

The crossing to North America did not seem so great in comparison with the hardships many Scots endured at home. It was long, expensive, and cramped, but also rewarding. North America offered land and the chance for settlers to prove themselves in a new place. And many did prove themselves as they fought to forge a new nation in the American War of Independence. The ancestors of those Scots can now experience much of their once-lost heritage through the Clan societies and highland games that have sprung up across North America in the last century. A search of immigration and passenger lists revealed many important, early immigrants to North America bearing the name of Rabeson: Robert Robson and Jane settled in Georgia with three children in 1775; Rowland Robson settled in Virginia in 1716; Charles, James, John, Mathew, Robert, Thomas Robson all arrived in Philadelphia between 1840 and 1870.