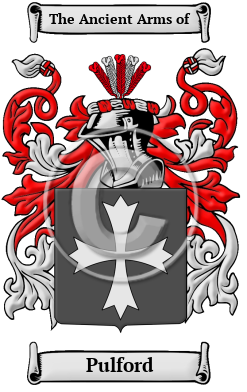 The Anglo-Saxon name Pulford comes from when the family resided in the parish of Pulford, in Cheshire, a few miles from the City of Chester. The place-name is derived from the Old English words pul or pol, which mean pool, and ford, which is a place where a river may be crossed by wading. The place-name as a whole means "river crossing near a pool." The place-name was recorded as Pulford in the Domesday Book, [1] compiled in 1086. The surname means "one who comes from Pulford," or alternatively "dweller by the river crossing where there is a pool."

Early Origins of the Pulford family

The surname Pulford was first found in Cheshire where they held a family seat from early times and their first records appeared on the early census rolls taken by the early Kings of Britain to determine the rate of taxation of their subjects.

Early History of the Pulford family

This web page shows only a small excerpt of our Pulford research. Another 83 words (6 lines of text) covering the year 1190 is included under the topic Early Pulford History in all our PDF Extended History products and printed products wherever possible.

Before English spelling was standardized a few hundred years ago, spelling variations of names were a common occurrence. Elements of Latin, French and other languages became incorporated into English through the Middle Ages, and name spellings changed even among the literate. The variations of the surname Pulford include Pulford, Pullford and others.

More information is included under the topic Early Pulford Notables in all our PDF Extended History products and printed products wherever possible.

Pulford migration to the United States +

Pulford Settlers in United States in the 17th Century

Pulford Settlers in United States in the 18th Century

Pulford Settlers in United States in the 19th Century

Pulford Settlers in Canada in the 19th Century

Pulford Settlers in Australia in the 19th Century

Pulford Settlers in New Zealand in the 19th Century

Pulford Settlers in West Indies in the 17th Century

Historic Events for the Pulford family +