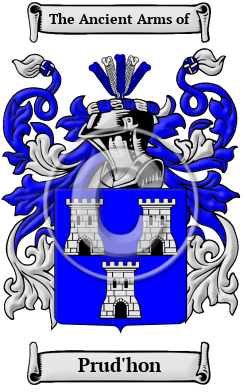 From the historical and enchanting region of France emerged a multitude of notable family names, including that of the distinguished Prud'hon family. Originally, the people in this region went by one (personal) name. Surnames evolved during the Middle Ages when people began to assume an extra name to avoid confusion and to further identify themselves. These names then began to become "fixed" or hereditary between the generations. One of the types of names adopted as surnames were those derived from nicknames. Nicknames, or "eke-names," were an added name that generally reflected some physical characteristics or other attribute of the person that used the name. The Prud'hon surname derives from the Old French "prud’homme" meaning a "wise," or "sensible" man; and as such was a nickname for an honest, or wise man.

Early Origins of the Prud'hon family

The surname Prud'hon was first found in Guyenne in the south-west of France where they held a family seat in the seigneurie of St.-Maur, and were members of the aristocracy of that region for many centuries.

By the 14th century they had moved north to Maine and Normandy and in the latter region where seated in Boussinière. They also moved west into Brittany where they held a family seat at Papinière. They also branched to Liège and Lorraine. Meanwhile, in the main seat in Guyenne they were elected to the nobility as Viscounts, and the family were a great influence in the cultural affairs of south-western France. Pierre Prudhon was a notable French painter, 1758-1823.

Louis Prud'homme, born in 1608, son of Claude and Isabelle, was a French brewer that travelled from île-de-Frane to Canada in 1636. After arriving in the province of Quebec he married Roberte Gadois, born in 1626, daughter of Pierre and Louise, at Montreal on 30th November 1650. When Louis and Roberte married the governor of Montreal made a concession of thirty acres of land. They remained in Quebec together until Louis passed away on 2nd July 1671. [1]

Early History of the Prud'hon family

This web page shows only a small excerpt of our Prud'hon research. More information is included under the topic Early Prud'hon History in all our PDF Extended History products and printed products wherever possible.

More information is included under the topic Early Prud'hon Notables in all our PDF Extended History products and printed products wherever possible.

Migration of the Prud'hon family

Some of the first settlers of this family name or some of its variants were: Jean Prud'homme (1706), and Jean Baptiste Prud'homme (1758) settled in Quebec from Brittany; Louis Prud'homme arrived in Quebec in 1641 from Ile-de-France on the borders of Normandy.