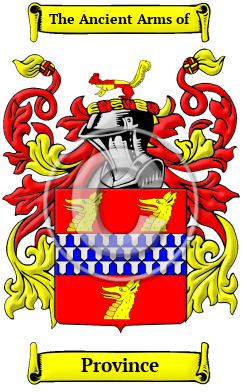 The Province surname is a habitational name, taken on from "the lands of Provan, formerly a possession of the prebendary of Barlanark, one of the canons of Glasgow cathedral. Provand is the vemacular for prebenda. A surname around Glasgow and also surname of a family long connected with Strathblane and Killearn. Richard de Prebenda who was clerk to William the Lion, is probably Richard de Prebenda, charter witness, c. 1190, 1200, and 1231." [1]

Early Origins of the Province family

The surname Province was first found in Lanarkshire (Gaelic: Siorrachd Lannraig) a former county in the central Strathclyde region of Scotland, now divided into the Council Areas of North Lanarkshire, South Lanarkshire, and the City of Glasgow, where they held a family seat from early times and their first records appeared on the census rolls taken by the ancient Kings of Britain to determine the rate of taxation of their subjects.

Early History of the Province family

More information is included under the topic Early Province Notables in all our PDF Extended History products and printed products wherever possible.

In the United States, the name Province is the 8,540th most popular surname with an estimated 2,487 people with that name. [2]

Province migration to the United States +

Province Settlers in United States in the 19th Century