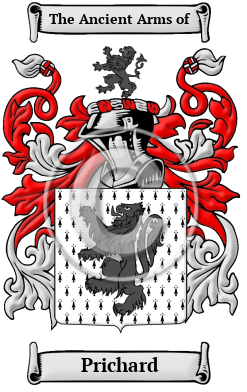 The name Prichard was a Welsh patronymic surname created from the personal name Richard. [1] [2] The name was originally ap-Richard, the Welsh patronymic prefix "ap-," meaning "son of." The use of the prefix has disappeared over the course of time.

Early Origins of the Prichard family

The surname Prichard was first found in Glamorganshire (Welsh: Sir Forgannwg), a region of South Wales, anciently part of the Welsh kingdom of Glywysing, where they held a family seat from very ancient times, some say well before the Norman Conquest and the arrival of Duke William at Hastings in 1066 A.D.

Spelling variations for this name are numerous through the ages. So as to underline this, a look at the Register of the University of Oxford reveals: David Aprycharde, 1521; William Prichard, or Ap-Richard, 1545; [3] and Thomas Prichett, London, 1616. [4]

Early History of the Prichard family

Although there are not an extremely large number Welsh surnames, there are an inordinately large number of spelling variations of those surnames. This variety of spellings began almost immediately after the acceptance of surnames within Welsh society. As time progressed, these old Brythonic names were eventually were recorded in English. This process was problematic in that many of the highly inflected sounds of the native language of Wales could not be properly captured in English. Some families, however, did decide to modify their own names to indicate a branch loyalty within the family, a religious adherence, or even a patriotic affiliation. The name Prichard has seen various spelling variations: Pritchard, Prichard, Prickard and others.

Prominent amongst the family during the late Middle Ages was Matthew Pritchard, O.F.M. (1669-1750) a Roman Catholic bishop; John Pritchett (died 1681), an English clergyman, Bishop of Gloucester (1672-1681). Sir William Pritchard or Prichard (1632?-1705), was an English merchant and politician, Sheriff of London in 1672, Lord Mayor of London in 1682. He was second son of Francis Pritchard of Southwark, and his wife, Mary Eggleston. He is described as 'merchant taylor' and alderman of Broad Street. In 1672 he was sheriff of London, and was knighted on 23 Oct. in that year. On 29 Sept. 1682 be went to the poll...
Another 184 words (13 lines of text) are included under the topic Early Prichard Notables in all our PDF Extended History products and printed products wherever possible.

In the United States, the name Prichard is the 3,538th most popular surname with an estimated 7,461 people with that name. [5]

Migration of the Prichard family to Ireland

Some of the Prichard family moved to Ireland, but this topic is not covered in this excerpt.
Another 70 words (5 lines of text) about their life in Ireland is included in all our PDF Extended History products and printed products wherever possible.

Prichard migration to the United States +

The Welsh migration to North America in the late 19th and early 20th centuries contributed greatly to its rapid development. These migrants were in search of land, work, and freedom. Those Welsh families that survived the long ocean journey were critical to the development of new industries and factories, and to the quick settlement of land. They also added to an ever-growing rich cultural heritage. A search of the immigration and passenger lists has shown a number of people bearing the name Prichard:

Prichard Settlers in United States in the 17th Century

Prichard Settlers in United States in the 18th Century

Prichard Settlers in United States in the 19th Century

Prichard Settlers in Canada in the 17th Century

Prichard Settlers in Australia in the 19th Century

Prichard Settlers in New Zealand in the 19th Century

Prichard Settlers in West Indies in the 17th Century

Historic Events for the Prichard family +