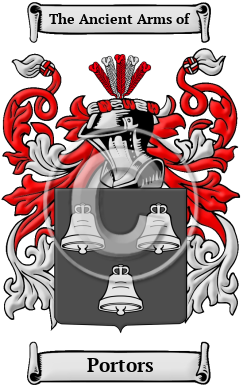 The Portors family name was originally adopted from the original bearers' occupation. Portors was an occupational name for a gatekeeper or watchman deriving its origin from the Old French word "portier," meaning "doorman." In the royal castles, and in some monasteries, the office of Porter was usually hereditary, and lands and privileges were usually connected to the position. "He also kept the keys and had power to refuse admission to those whom he deemed unworthy." [1]

Early Origins of the Portors family

The surname Portors was first found in Kyle, where Radulfus the porter witnessed the gift of the church of Cragyn (Craigie) to the monastery of Paisley in 1177. A few years later, Simon the porter witnessed a charter by William the Lion to Radulph de Graham c. 1180. John the Porter of Linlithgow and Walter the Porter of Lanarkshire rendered homage in 1296 to King Edward I. Robert Porter, dominus de Porterfield, in 1399 gave the monks of Paisley an annual rent of sixteen pennies from burgage tenements in Renfrew and also confirmed a former grant of his father, Stephen Porter. [1]

Further to the south, there were scant early records. However, the Hundredorum Rolls of 1273 did include one listing: Robert le Porter. [2]

The name was "not found in my list north of Lancashire and Lincolnshire, but scattered irregularly over the rest of England, being best represented in Somerset, Oxfordshire, Leicestershire, Rutlandshire, Essex, Norfolk, and Lancashire. This name was numerous in Cambridgeshire, Hunts, and Norfolk in the reign of Edward I (Hundred Rolls.) " [3] This last entry is a bit of an anomaly as the aforementioned Hundredorum Rolls (Hundred Rolls) had one entry, while the latter author claimed there were many.

Early History of the Portors family

This web page shows only a small excerpt of our Portors research. Another 82 words (6 lines of text) covering the years 1296, 1691 and are included under the topic Early Portors History in all our PDF Extended History products and printed products wherever possible.

Spelling variations of this family name include: Porter, Pawter, Poreter, Portar and others.

More information is included under the topic Early Portors Notables in all our PDF Extended History products and printed products wherever possible.

Migration of the Portors family to Ireland

Some of the Portors family moved to Ireland, but this topic is not covered in this excerpt.
Another 243 words (17 lines of text) about their life in Ireland is included in all our PDF Extended History products and printed products wherever possible.

Migration of the Portors family