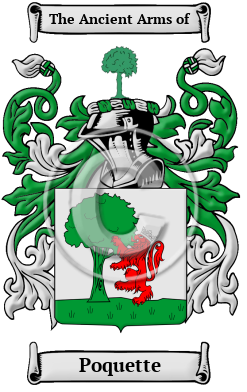 The Poquette surname comes from the personal name Pasquet, which was a form of Pascal. The Old French word, "pacquet", meant "bundle of kindling", thus in some instances, the name may have originally been an occupational name for a gatherer or seller of firewood or kindling.

Early Origins of the Poquette family

The surname Poquette was first found in Limousin where they held a family seat in the seigneurie of Salaignac, and were members of the distinguished aristocracy of that region.

The family also moved across the border into Belgium in the province of Namur, and there the family flourished and were elevated to the nobility in 1770 as Lords or Seigneures, continuing to 1819, and as Barons in 1844, where they held a family seat at d'Acos. They also had domains in the region of d'Angoulème in Belgium. Meanwhile in France they branched to Dauphiné, Brittany, and to Lorraine where they became Seigneurs in 1708.

Isaac Paquet, son of Mathurin and Marie (née Fumillon), travelled from Poitou, France to Canada in the 17th century. He married Elisabeth Meunier on 30th June 1670 at Château-Richer, Quebec. Isaac passed away on 1702 and was buried at Saint-Laurent-de-l'ìle-d'Orléans, Quebec on 18th June 1702. [1]

Early History of the Poquette family

This web page shows only a small excerpt of our Poquette research. More information is included under the topic Early Poquette History in all our PDF Extended History products and printed products wherever possible.

Throughout the course of history most surnames have undergone changes for many reasons. During the early development of the French language, a son and father may not have chosen to spell their name the same way. Many are simple spelling changes by a person who gave his name, phonetically, to a scribe, priest, or recorder. Many names held prefixes or suffixes which became optional as they passed through the centuries, or were adopted by different branches to signify either a political or religious adherence. Hence, we have many spelling variations of this name, Poquette some of which are Pasquet, Paquet, Paquett, Paquette, Paquitt, Pacquet, Pacquett, Pacquette, Paquit, Paquitte, Paquotte, Paquott, Paquot, Pasquier, Pasquiet, Passaquet, Passquet and many more.

Notable amongst the family was Étienne Pasquier (June 7, 1529 - September 1, 1615) was a French lawyer and man of letters. Later, the Baron and Duke Pasquier, (1767-1862) was a noted French politician. A Councillor in Parliament who was...
Another 40 words (3 lines of text) are included under the topic Early Poquette Notables in all our PDF Extended History products and printed products wherever possible.

Migration of the Poquette family

Approximately 110 years after the first landings by Cartier, there were only about 300 people in Quebec. France gave land incentives for 2,000 migrants during the next decade. Early marriage was desperately encouraged amongst the immigrants. The fur trade attracted migrants, both noble and commoner. 15,000 explorers left Montreal in the late 17th and 18th centuries. By 1675, there were 7000 French in Quebec. Migration to New France (Quebec) continued from France until it fell in 1759. In the year 1675 the Acadian presence in Nova Scotia, New Brunswick and Prince Edward Island had reached 500. In 1755, 10,000 French Acadians refused to take an oath of allegiance to England and were deported to Louisiana. The French founded Lower Canada, thus becoming one of the two great founding nations of Canada. The distinguished family name Poquette has made significant contributions to the culture, arts, sciences and religion of France and New France. Amongst the settlers in North America with this distinguished name Poquette were Widow Paquot who settled in Philadelphia in 1796 with her daughter; Anton Paquet settled in Philadelphia in 1848; Isaac Paquet settled in Quebec in 1665 at Vallé.