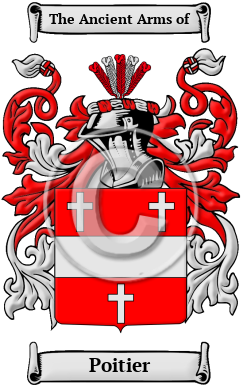 The Poitier surname comes from the Old French word "pot", meaning a "drinking vessel"; as such, it is thought to have been an occupational name for a maker of drinking or storage vessels.

Early Origins of the Poitier family

The surname Poitier was first found in Normandy (French: Normandie), the former Duchy of Normandy, where they held a family seat at Courcy, an ancient castle and dukedom that played such an important role in the defense of northern and eastern France. The house of Potier would eventually be elevated to the Dukes of Gevres, and the Dukes of Tresmes, and Gevres, who held a family seat in Brittany.

Early History of the Poitier family

This web page shows only a small excerpt of our Poitier research. Another 51 words (4 lines of text) covering the years 1648, 1699, and 1772 are included under the topic Early Poitier History in all our PDF Extended History products and printed products wherever possible.

Another 27 words (2 lines of text) are included under the topic Early Poitier Notables in all our PDF Extended History products and printed products wherever possible.

Poitier migration to the United States +

Poitier Settlers in United States in the 18th Century

Poitier Settlers in Canada in the 17th Century