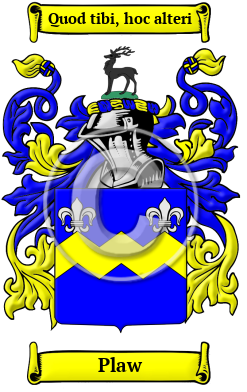 The name Plaw is an old Anglo-Saxon name. It comes from when a family lived in Plowden, a hamlet in the parish of Lydbury North, Shropshire. The local dates back to 1252 when it was first listed as Plaueden and literally means "valley where play or sport takes place," from the Old English words "plaga" + "denu." [1]

Early Origins of the Plaw family

The surname Plaw was first found in Shropshire where they held a family seat as Lords of the Manor of Plowden. Traditionally, they held these estates at the time of the Norman Conquest, but the first record is of Sir Roger Plowden who accompanied King Richard on his Crusade to the Holy Land and was present at the siege of Acre (1191). For his gallantry he was awarded by the King an augmentation of two fleur-des-lys on his Coat of Arms, a distinction the family has borne ever since. [2] "The name occurs upon all county records from the reign of Henry III." [2]

Early History of the Plaw family

Before the last few hundred years, the English language had no fast system of spelling rules. For that reason, spelling variations are commonly found in early Anglo-Saxon surnames. Over the years, many variations of the name Plaw were recorded, including Plowden, Plowdon, Ploughden, Ploweden, Plough and many more.

Distinguished members of the family include Edmund Plowden (1518-1585), a distinguished English lawyer, legal scholar and Member of Parliament, he was born at Plowden Hall, Lydbury, Shropshire; Thomas Plowden (1594-1664), an English Jesuit from Oxfordshire; Sir Edmund Plowden (1590-1659), grandson of the aforementioned Edmund was...
Another 45 words (3 lines of text) are included under the topic Early Plaw Notables in all our PDF Extended History products and printed products wherever possible.

Plaw Settlers in New Zealand in the 19th Century