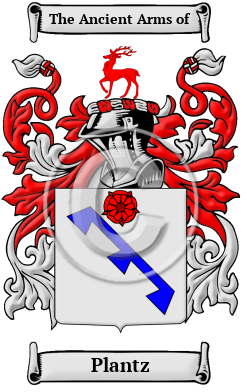 The ancestors of the Plantz family brought their name to England in the wave of migration after the Norman Conquest of 1066. The name Plantz is for a gardener as the name was originally derived from the Old English word plant meaning plant, or young tree. [1] [2]

Early Origins of the Plantz family

The surname Plantz was first found in London where they held a family seat being descended from Fulk, the Count of Anjou, whose descendants were exemplified by the Emperor, Henry V of Germany, and Henry who ascended the English throne and planted the Plantagenet dynasty. He bore the three royal lines which continued until the time of Edward III who added a crest of another lion. The eventual heiress of this house was the Princess Elizabeth of York, daughter of Edward IV, and Queen of Henry VII. Many junior lines abounded. [3]

Early History of the Plantz family

This web page shows only a small excerpt of our Plantz research. Another 128 words (9 lines of text) covering the years 1533 and 1605 are included under the topic Early Plantz History in all our PDF Extended History products and printed products wherever possible.

More information is included under the topic Early Plantz Notables in all our PDF Extended History products and printed products wherever possible.

Migration of the Plantz family to Ireland

Some of the Plantz family moved to Ireland, but this topic is not covered in this excerpt. More information about their life in Ireland is included in all our PDF Extended History products and printed products wherever possible.

Plantz migration to the United States +

Plantz Settlers in United States in the 18th Century

Plantz Settlers in United States in the 19th Century