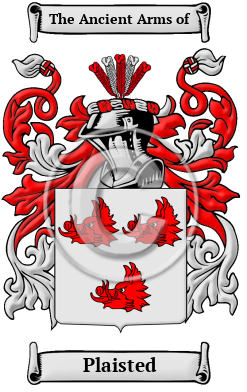 Early Origins of the Plaisted family

The surname Plaisted was first found in Essex at Plaistow, a ward and district chapelry, in the parish and union of West Ham, hundred of Becontree, about 5 miles (E. by N.) from London. Alternatively the family could have originated in the West division of Sussex, at Plaistow, a chapelry, in the parish of Kirdford, union of Petworth, hundred of Rotherbridge, rape of Arundel. [1] To complicate matters more, there are location names Derbyshire and Kent and one source notes that the name could have originated in Plaster Down, Devon; Plastow Green; Plasterhill Farm; or Pleastor in Hampshire, [2]

"In medieval times, most large parishes had their play-stow, playsted, or locus ludorum, for the recreation of the inhabitants. " [3]

It is generally agreed that the name originated from the Old English "pleg-stow," which means "place for play or sport." [4]

The first record of the family was of Robert de Plegestoue who was listed in the Pipe Rolls of Devon in 1168. [2]

Early History of the Plaisted family

More information is included under the topic Early Plaisted Notables in all our PDF Extended History products and printed products wherever possible.

In the United States, the name Plaisted is the 17,193rd most popular surname with an estimated 2,487 people with that name. [6]

Plaisted migration to the United States +

Plaisted Settlers in United States in the 17th Century

Plaisted Settlers in United States in the 19th Century

Plaisted Settlers in Australia in the 19th Century