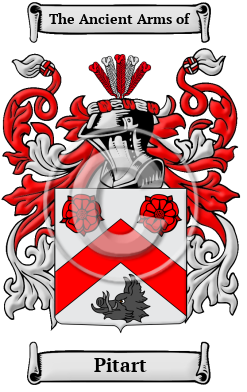 Early Origins of the Pitart family

The surname Pitart was first found in Normandy (French: Normandie), the former Duchy of Normandy, where this eminent family held a family seat since ancient times. One of the earliest records of the family was that of Jean Pitard (c.1228-1315), French royal surgeon to Louis IX, Philip the Bold and Philip the Fair of France.

Early History of the Pitart family

Notable amongst the family in this period was Joseph Pitton de Tournefort (1656-1708), a French botanist, notable as the first to make a clear definition of the concept of genus for plants...
Another 32 words (2 lines of text) are included under the topic Early Pitart Notables in all our PDF Extended History products and printed products wherever possible.

Migration of the Pitart family

Some of the first settlers of this family name or some of its variants were: Pierre Pitot, who settled in Canada in 1648; Pierre Piton, who married Jeanne Lantier in 1735 in Lachenaye, Quebec; Augte Pitaud, who, at the age of 22.