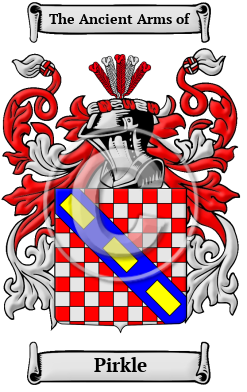 Early Origins of the Pirkle family

The surname Pirkle was first found in West Lothian, where they held a family seat. It is most likely that this name was one of the Norman families which joined the train of the Earl of Huntingdon in his move north to become King David of Scotland, they taking the surname from the lands of Parkley. King David granted much land in the district to his disgruntled Norman friends from the south.

Early History of the Pirkle family

This web page shows only a small excerpt of our Pirkle research. Another 126 words (9 lines of text) covering the years 1424, 1432, and 1448 are included under the topic Early Pirkle History in all our PDF Extended History products and printed products wherever possible.

More information is included under the topic Early Pirkle Notables in all our PDF Extended History products and printed products wherever possible.

In the United States, the name Pirkle is the 12,161st most popular surname with an estimated 2,487 people with that name. [1]

Migration of the Pirkle family

Some of the first settlers of this family name or some of its variants were: Robert Parkle who landed in North America in 1700.