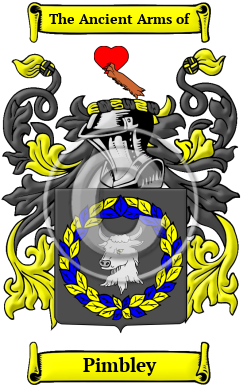 Early Origins of the Pimbley family

The surname Pimbley was first found in Somerset where the family can be "traced to Philip Pym, of Brymmore, 12 Edward IV." [1] Indeed, there is much debate about the origin of this name. Another reference claims "considering that Eufemia is fairly common in the Hundred Rolls, that Pimme is feminine, and Phemie is still the nickname, it all but certain that we have here the solution of the name in question. Personally I have no doubt that this derivation is correct. " [2] The Hundred Rolls of 1273 lists the following: Eufemmia de Neville in Lincolnshire; Katerina Eufemme in Norfolk; Pimme, widow of Peter Seman in Cumberland; Bartholomew filius Pimme in Hunts; Chun Pimme in Cambridge and finally Henry Pimme in Cambridge. Later the Yorkshire Poll Tax Rolls of 1379, list Agnes Pyme and Johannes Pymson. [2]

Early History of the Pimbley family

One relatively recent invention that did much to standardize English spelling was the printing press. However, before its invention even the most literate people recorded their names according to sound rather than spelling. The spelling variations under which the name Pimbley has appeared include Pym, Pymm, Pyme, Pymme, Pim, Pimm, Pimme and others.

Distinguished members of the family include John Pym (1584-1643), English statesman from Bridgwater, Somerset who moved for the impeachment of advisers to Charles I; his actions led to the English Civil War; and Sir...
Another 33 words (2 lines of text) are included under the topic Early Pimbley Notables in all our PDF Extended History products and printed products wherever possible.

Migration of the Pimbley family to Ireland

Some of the Pimbley family moved to Ireland, but this topic is not covered in this excerpt. More information about their life in Ireland is included in all our PDF Extended History products and printed products wherever possible.

Migration of the Pimbley family

At this time, the shores of the New World beckoned many English families that felt that the social climate in England was oppressive and lacked opportunity for change. Thousands left England at great expense in ships that were overcrowded and full of disease. A great portion of these settlers never survived the journey and even a greater number arrived sick, starving, and without a penny. The survivors, however, were often greeted with greater opportunity than they could have experienced back home. These English settlers made significant contributions to those colonies that would eventually become the United States and Canada. An examination of early immigration records and passenger ship lists revealed that people bearing the name Pimbley arrived in North America very early: Henry Pym, who settled in Barbados in 1668; Mary Pym, who settled in Virginia in 1673; Richard Pymm, who settled in Barbados in 1667; Charles Pym, who arrived in New England in 1715.