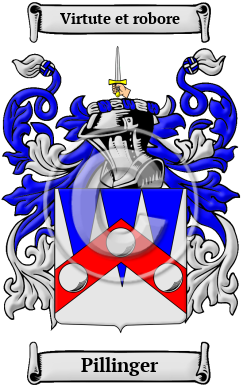 The name Pillinger came to England with the ancestors of the Pillinger family in the Norman Conquest of 1066. The Pillinger family lived in Yorkshire. The name was a reference to Pilling Manor, where the family lived. This stately residence is in the parish of Tankersley, nine miles from Sheffield, in the West Riding of Yorkshire, and now belongs to the distinguished Lord Wharncliffe.

Early Origins of the Pillinger family

The surname Pillinger was first found in Lancashire at Pilling, a chapelry, in the parish and union of Garstang, hundred of Amounderness. " 'Pilyn' was possessed by the abbey of Cockersand until the Dissolution, when Henry VIII. granted lands here." [1] [2]

Early History of the Pillinger family

This web page shows only a small excerpt of our Pillinger research. Another 96 words (7 lines of text) are included under the topic Early Pillinger History in all our PDF Extended History products and printed products wherever possible.

Multitudes of spelling variations are a hallmark of Anglo Norman names. Most of these names evolved in the 11th and 12th century, in the time after the Normans introduced their own Norman French language into a country where Old and Middle English had no spelling rules and the languages of the court were French and Latin. To make matters worse, medieval scribes spelled words according to sound, so names frequently appeared differently in the various documents in which they were recorded. The name was spelled Pilling, Pillans, Pilland, Pillings and others.

More information is included under the topic Early Pillinger Notables in all our PDF Extended History products and printed products wherever possible.

Migration of the Pillinger family to Ireland

Some of the Pillinger family moved to Ireland, but this topic is not covered in this excerpt. More information about their life in Ireland is included in all our PDF Extended History products and printed products wherever possible.

Pillinger Settlers in Australia in the 19th Century