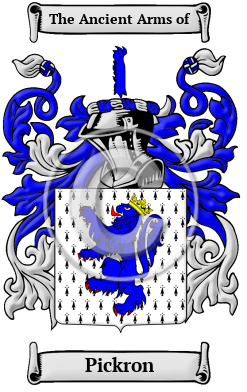 Early Origins of the Pickron family

The surname Pickron was first found in the North Riding of Yorkshire at Pickering, a market-town and parish, and the head of a union, in Pickering lythe. "The origin of this place is said to be very remote, being dated by tradition 270 years before the commencement of the Christian era, and ascribed to Peridurus, a British king, who was interred here, on the brow of a hill called Rawcliff. According to local tradition, also, its name is derived from the circumstance of a ring having been lost by the founder whilst washing in the river Costa, and subsequently found in the belly of a pike." [1]

Some of the earliest records of the family were Sir James Pickering (fl. 1383), Speaker of the House of Commons, was son of Sir John Pickering of Killington, Westmorland. The family had been established at Killington since 1260. Thomas Pickering (died 1475) was an early English genealogist and was presumably a native of Pickering, Yorkshire. [2]

Early History of the Pickron family

One relatively recent invention that did much to standardize English spelling was the printing press. However, before its invention even the most literate people recorded their names according to sound rather than spelling. The spelling variations under which the name Pickron has appeared include Puckering, Pickering, Pykering, Pikering and others.

Notables of this surname at this time include: Sir John Puckering (1544-1596), an English lawyer, politician, Speaker of the English House of Commons, and Lord Keeper from 1592 until his death; Sir Gilbert Pickering, 1st Baronet (1611-1668), a regicide, a member of the English Council of State during the Protectorate of Oliver Cromwell, and a member of Cromwell's Upper House; Sir Henry Pickering, 1st Baronet (1613-1668), an English landowner and politician who sat in the House of Commons in...
Another 78 words (6 lines of text) are included under the topic Early Pickron Notables in all our PDF Extended History products and printed products wherever possible.

Migration of the Pickron family

At this time, the shores of the New World beckoned many English families that felt that the social climate in England was oppressive and lacked opportunity for change. Thousands left England at great expense in ships that were overcrowded and full of disease. A great portion of these settlers never survived the journey and even a greater number arrived sick, starving, and without a penny. The survivors, however, were often greeted with greater opportunity than they could have experienced back home. These English settlers made significant contributions to those colonies that would eventually become the United States and Canada. An examination of early immigration records and passenger ship lists revealed that people bearing the name Pickron arrived in North America very early: George Pickering who settled in Salem Massachusetts in 1630; along with John; John Pickering settled in Virginia in 1653; Samuel Pickering settled in Nova Scotia in 1774.