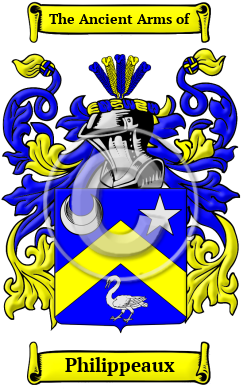 The Philippeaux family can find its origins within the landscape of Medieval France, particularly in that coastal region once known as Normandy. Their name is derived from the ancient Greek name Phillippos, which is composed of the elements philos, meaning love, and hippos, meaning horse, and indicated a person who loved horses.

Early Origins of the Philippeaux family

The surname Philippeaux was first found in Normandy (French: Normandie), the former Duchy of Normandy, where they held a family seat as an aristocratic family at Marigny. Conjecturally, this family may be descended from Phillip, the Count of Namur, but there have been many Kings of this name including Philip I, King of France, King Philip Augustus, Philip the Bold, Philip of Valois, or Philip of France, Duke of Burgundy, and many saints, bishops, Dukes, and other nobility and place names.

Early History of the Philippeaux family

French surnames were subject to numerous alterations in spelling because of the various cultural groups that inhabited specific regions. Eventually, each region possessed its own local dialect of the French language. The early development of the French language, however, was also influenced by other languages. For example, Old French was infused with Germanic words and sounds when barbarian tribes invaded and settled in France after the fall of the Roman Empire. Middle French also borrowed heavily from the Italian language during the Renaissance. As a result of these linguistic and cultural influences, the name Philippeaux is distinguished by a number of regional variations. The many spelling variations of the name include Philippe, Phillippe, Phillippes, Philippes, Philipp, Phillipp, Phelipe, Phelippe, Phellippe, Phellippes, Philipe, Phillipes, Philip, Phillip and many more.

Notable amongst the family in this period was Philippe of Vitry, Composer of music and counselor to Jean, Duke of Normandy, 1291-1361. Louis Phélypeaux (1643-1727), was Marquis de Phélypeaux (1667), Comte de Maurepas (1687), Comte de Pontchartrain (1699), known as the Chancellor de Pontchartrain, was a French politician. Isle Phelipeaux or Isle Philippeaux - also called Isle Minong is a phantom...
Another 60 words (4 lines of text) are included under the topic Early Philippeaux Notables in all our PDF Extended History products and printed products wherever possible.

Migration of the Philippeaux family

France finally gave land incentives for 2,000 migrants during the 1700s. Early marriage was encouraged in New France, and youths of 18 took fourteen-year-old girls for their wives. The fur trade was developed and attracted migrants, both noble and commoner from France. 15,000 explorers left Montreal in the late 17th and 18th centuries, leaving French names scattered across the continent. The search for the Northwest passage continued. Migration from France to New France or Quebec, as it was now more popularly called, continued until 1759. By 1675, there were 7000 French in Quebec. By the same year the Acadian presence in Nova Scotia, New Brunswick and Prince Edward Island had reached 500. In the treaty of Utrecht, the Acadians were ceded by France to Britain in 1713. In 1755, 10,000 French Acadians refused to take an oath of allegiance to England and were deported. They found refuge in Louisiana. Meanwhile, in Quebec, the French race flourished, founding in Lower Canada, one of the two great solitudes which became Canada. Many of this distinguished family name Philippeaux were prominent in social, cultural, religious and political affairs in France and New France. Amongst the settlers in North America with this distinguished name Philippeaux were Francisco Phelipe, with his wife Maria and three sons settled in New Orleans La. in 1779; Claude Philipe and his wife settled in Virginia in 1700; Mr. Phillip settled in Virginia in 1623.