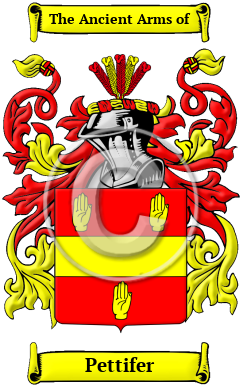 The Pettifer family name is thought to be of Norman origins. It comes from an early member of the family who was a person who never tired of walking or a soldier who had lost his foot in battle. The name Pettifer is an Anglicized form of the Old French word pedefer, or pied de fer, which means iron foot. The family name Pettifer was brought to England after the Norman Conquest, when William the Conqueror gave his friends and relatives most of the land formerly owned by Anglo-Saxon aristocrats. They imported a vast number of Norman French personal names, which largely replaced traditional Old English personal names among the upper and middle classes.

Early Origins of the Pettifer family

The surname Pettifer was first found in Worcestershire where, they held a family seat after the Norman Conquest by William the Conqueror in 1066 A.D., where the name meant literally "Petite" and "Fere," meaning "the little wild beast," a soubriquet which has been corrupted to Pettifer, although a distant relationship has been claimed to Potiphar, the Faro's Captain of the Guard.

Early History of the Pettifer family

This web page shows only a small excerpt of our Pettifer research. Another 43 words (3 lines of text) covering the years 1760, 1665 and 1718 are included under the topic Early Pettifer History in all our PDF Extended History products and printed products wherever possible.

Endless spelling variations are a prevailing characteristic of Norman surnames. Old and Middle English lacked any definite spelling rules, and the introduction of Norman French added an unfamiliar ingredient to the English linguistic stew. French and Latin, the languages of the court, also influenced spellings. Finally, Medieval scribes generally spelled words according to how they sounded, so one person was often referred to by different spellings in different documents. The name has been spelled Pettifer, Pettipher, Petipher, Petifer, Petiver and many more.

Another 40 words (3 lines of text) are included under the topic Early Pettifer Notables in all our PDF Extended History products and printed products wherever possible.

Pettifer Settlers in New Zealand in the 19th Century