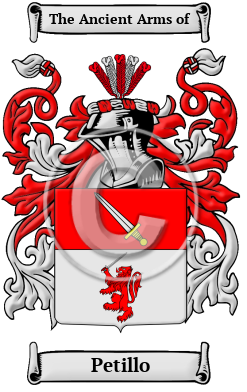 The rugged west coast of Scotland and the desolate Hebrides islands are the ancestral home of the Petillo family. Their name indicates that the original bearer lived in either of two places called Pittilloch; the first is near Freuchie in the county of Fife, while the second is in Glenfarg, in the county of Perth.

Early Origins of the Petillo family

The surname Petillo was first found in Fife, where they held a family seat from very early times, and are conjecturally descended according to Historian, Hugh MacDonald, from the MacLullichs, who claim descent from Angus, grandson of Somerled, Lord of the Isles, the original name being Patilloch or Patillock.

Early History of the Petillo family

Another 47 words (3 lines of text) are included under the topic Early Petillo Notables in all our PDF Extended History products and printed products wherever possible.

In the United States, the name Petillo is the 17,614th most popular surname with an estimated 2,487 people with that name. [1]

Petillo migration to the United States +

The hardy Scots who made the crossing settled all along the east coast of North America and in the great west that was just then opening up. At the time of the American War of Independence, many United Empire Loyalists moved north from the American colonies to Canada. Scottish national heritage became better known in North America in the 20th century through highland games and other patriotic events. An examination of immigration records and passenger ship lists revealed that people bearing the name Petillo arrived in North America very early:

Petillo Settlers in United States in the 19th Century