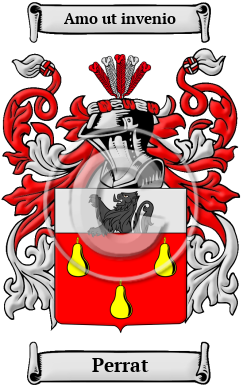 The name Perrat was brought to England in the great wave of migration following the Norman Conquest of 1066. It comes from the name Peter. This name was a baptismal name that was originally derived from the French name Pierre and was a diminutive of the name Parrot, which means little Peter.

Interestingly, the English word "parrot," for the talking bird, was not in use until the 16th century, much later than this word's use as a surname.

Another source claims the name was originally "De Perrott from Castel Perrott, which he built in Armorica (Brittany), and the town of Perrott, one league from it. He came over to England in 957, and obtained some lands in Wessex, on a river which changed its name to the Perrot (now corrupted to the Parret), in Somersetshire." [1]

Early Origins of the Perrat family

The surname Perrat was first found in Pembrokeshire where they were granted the lands of Ystington, Haroldston, and Carew Castle in that shire by King William for their assistance at the Battle of Hastings in 1066 A.D. [2] Sir Stephen Perrott married Helen, the daughter of Marchion Ap Rice, Prince of South Wales at the beginning of the 12th century. "The valour and magnanimity of Sir Stephen gained him the respect and love of the Princess Ellyn's people. Their son, Sir Andrew, claimed the kingdom of Wales, in right of his mother, and collected a body of forces in assertion of his right, but the King of England marched a numerous army into the country to take advantage of the disorders; the knowledge of which and a sum of money offered by the English king, through the Bishop of St. David's, brought him to declare for that prince, who knighted him, on his doing homage for the land for twenty miles round Sir William's camp, whereon he built the Castle of Narbeth, whose ruins are extant in Pembroke." [1]

"The name of Parrott, probably a form of Perrett or Perrott, a common Somersetshire name, is better represented in Buckinghamshire, and is referred to also under that county. There was a gentle family of Parratt in the parish of Enstone [Oxfordshire] during the reign of Elizabeth." [4]

Early feudal rolls provided the king of the time a method of cataloguing holdings for taxation, but today they provide a glimpse into the wide surname spellings in use at that time. Ralph Perot was listed in Essex in 1235 and later in the Hundredorum Rolls of 1273 in Bedfordshire. William Poret was found in the Subsidy Rolls for Yorkshire in 1301; and John Parrat was in early London records in 1344. [5]

Early History of the Perrat family

A multitude of spelling variations characterize Norman surnames. Many variations occurred because Old and Middle English lacked any definite spelling rules. The introduction of Norman French to England also had a pronounced effect, as did the court languages of Latin and French. Therefore, one person was often referred to by several different spellings in a single lifetime. The various spellings include Perrot, Parrott, Parrot, Perrott, Perot, Perott, Perrett and many more.

Outstanding amongst the family at this time was Rober Perrot (died 1550), English organist of Magdalen College, Oxford, second son of George Perrot of Harroldston, Pembrokeshire; Sir James Perrot (1571-1636), a Welsh writer and politician, Member of Parliament for Haverfordwest in 1597, (1604-1622) and (1626-1629), Custos Rotulorum of Pembrokeshire...
Another 49 words (4 lines of text) are included under the topic Early Perrat Notables in all our PDF Extended History products and printed products wherever possible.

Migration of the Perrat family to Ireland

Some of the Perrat family moved to Ireland, but this topic is not covered in this excerpt.
Another 104 words (7 lines of text) about their life in Ireland is included in all our PDF Extended History products and printed products wherever possible.

Migration of the Perrat family

Many English families left England, to avoid the chaos of their homeland and migrated to the many British colonies abroad. Although the conditions on the ships were extremely cramped, and some travelers arrived diseased, starving, and destitute, once in the colonies, many of the families prospered and made valuable contributions to the cultures of what would become the United States and Canada. Research into the origins of individual families in North America has revealed records of the immigration of a number of people bearing the name Perrat or a variant listed above: Jean Perot who settled in New York State in 1685; together with Martha and Meta; John Perott settled in New York in 1762; Samuel Perrot settled in Barbados in 1678.