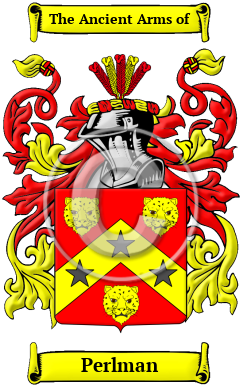 Early Origins of the Perlman family

The surname Perlman was first found in Oxfordshire at Oseney, where in year 1259 Henry and Reginald Perle were listed as holding lands at that time. The name is derived from the Middle English and Old French word "perle," meaning "pearl," one who sells pearls. [1]

Thomas Perle was found in the Close Rolls of 1343. [2] [3] The Hundredorum Rolls of 1273 included a listing for Egidias and Richard Perles, but no counties were listed.

And one source postulates that the name could be Norman French as the Magni Rotuli Scaccarii Normanniae records John and Tustin Peril or Perol in Normandy in 1198. [4]

Early History of the Perlman family

Distinguished members of the family include John Perle (died 1402), of Dorchester, Dorset, an English politician, Member (MP) of the Parliament of England for Dorchester in February 1388 and for Dorset in 1394. Another John Perle (died 1428), of Shrewsbury, Shropshire, was an English politician. He was Member (MP) of the Parliament of England for Shrewsbury in 1406, 1422 and 1423. Cora Pearl (1842-1886), the English courtesan assumed the name Pearl. She was born Emma Elizabeth Crouch at Caroline Place, East Stonehouse, Devonshire, on 23 Feb. 1842. "She was the daughter of Frederick William Nicholls Crouch, by his wife, Lydia Pearson, a...
Another 123 words (9 lines of text) are included under the topic Early Perlman Notables in all our PDF Extended History products and printed products wherever possible.

In the United States, the name Perlman is the 7,463rd most popular surname with an estimated 4,974 people with that name. [5]

Perlman migration to the United States +

Perlman Settlers in United States in the 20th Century