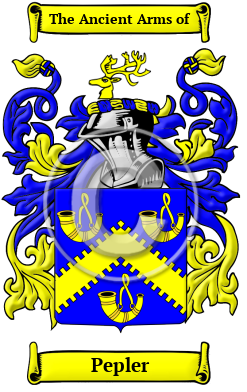 The origins of the Pepler name come from when the Anglo-Saxon tribes ruled over Britain. The name Pepler was originally derived from a family having lived in Peplow a small location found in the county of Shropshire. The surname Pepler was originally derived from the Old English word pyppel which referred to those individuals who lived on the pepple hill.

Early Origins of the Pepler family

The surname Pepler was first found in Shropshire where they held a family seat as Lords of the Manor of Peplow, originally pre-Conquest named Papelau, and conjecturally they are descended from the holder of the manor at the time of the taking of the Domesday Book in 1086, Ralph de Mortimer, who held the manor from Earl Roger. A new Peplow Hall was built in Georgian times.

Early History of the Pepler family

This web page shows only a small excerpt of our Pepler research. Another 127 words (9 lines of text) covering the years 1715, 1726, 1840, 1668 and 1752 are included under the topic Early Pepler History in all our PDF Extended History products and printed products wherever possible.

Before English spelling was standardized a few hundred years ago, spelling variations of names were a common occurrence. Elements of Latin, French and other languages became incorporated into English through the Middle Ages, and name spellings changed even among the literate. The variations of the surname Pepler include Peploe, Peplow, Pepplar, Peppler, Peplor, Pepler, Peplar and many more.

More information is included under the topic Early Pepler Notables in all our PDF Extended History products and printed products wherever possible.

Pepler migration to the United States +

Pepler Settlers in United States in the 18th Century

Pepler Settlers in United States in the 19th Century

Pepler Settlers in United States in the 20th Century

Pepler Settlers in Canada in the 20th Century

Pepler Settlers in New Zealand in the 19th Century