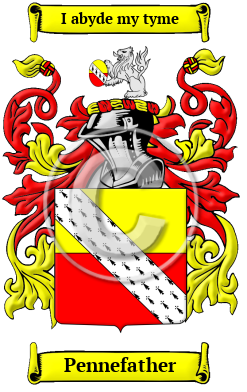 Early Origins of the Pennefather family

The surname Pennefather was first found in Merionethshire (Welsh: Sir Feirionnydd), made a county in Northwest Wales in 1284, and anciently part of the kingdom of Gwynedd, where they held a family seat from very ancient times, some say well before the Norman Conquest and the arrival of Duke William at Hastings in 1066 A.D.

Early History of the Pennefather family

This web page shows only a small excerpt of our Pennefather research. Another 61 words (4 lines of text) covering the years 1666, 1735, 1716 and 1733 are included under the topic Early Pennefather History in all our PDF Extended History products and printed products wherever possible.

More information is included under the topic Early Pennefather Notables in all our PDF Extended History products and printed products wherever possible.

Migration of the Pennefather family to Ireland

Some of the Pennefather family moved to Ireland, but this topic is not covered in this excerpt.
Another 147 words (10 lines of text) about their life in Ireland is included in all our PDF Extended History products and printed products wherever possible.

Pennefather Settlers in New Zealand in the 19th Century

Motto: I abyde my tyme
Motto Translation: I byde my time.