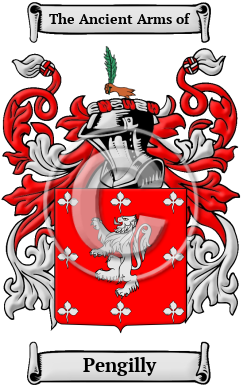 The proud Pengilly family originated in Cornwall, a rugged coastal region in southwestern England. In early times, people were known by only a single name. However, as the population grew and people traveled further afield, it became increasingly necessary to assume an additional name to differentiate between bearers of the same personal name. The manner in which hereditary surnames arose is interesting. Local surnames are derived from where the original bearer lived, was born, or held land. The Pengilly family originally lived in Cornwall, at the manor of Pengelly. The family claim descent from "an estate in the parish of St. Neot in Cornwall, anciently the property of the family." [1] [2] Literally the place name means "the head of the grove," from "pen-gilly, -gelly. [3]

"There is a hamlet of the name in St. Teath. The Pengellys are now mostly found around Penzance, and the Pengillys around Helston." [4]

Early Origins of the Pengilly family

The surname Pengilly was first found in Cornwall at Pengelly (Cornish: Penn-gelli), a hamlet now part of the village of Delabole. [5]

"Higher Hampt, [in the parish of Stoke-Climsland, Cornwall] belonged to the family of Pengelly, and afterwards to that of Harrison, is now the property and residence of Mr. William Mason." [7]

Early History of the Pengilly family

Cornish surnames are characterized by a multitude of spelling variations. The frequent changes in surnames are due to the fact that the Old and Middle English languages lacked definite spelling rules. The official court languages, which were Latin and French, were also influential on the spelling of a surname. Since the spelling of surnames was rarely consistent in medieval times, and scribes and church officials recorded names as they sounded rather than adhering to any specific spelling rules, it was common to find the same individual referred to with different spellings of their surname in the ancient chronicles. Moreover, a large number of foreign names were brought into England, which accelerated and accentuated the alterations to the spelling of various surnames. Lastly, spelling variations often resulted from the linguistic differences between the people of Cornwall and the rest of England. The Cornish spoke a unique Brythonic Celtic language which was first recorded in written documents during the 10th century. However, they became increasingly Anglicized, and Cornish became extinct as a spoken language in 1777, although it has been revived by Cornish patriots in the modern era. The name has been spelled Pengelly, Pengley, Pengelley and others.

Notable amongst the family at this time was Thomas Pengelly (fl. c.1650-1696), a wealthy British merchant who traded with the Eastern Mediterranean and the Atlantic Seaboard; he owned property in the East End of London, as well as in Finchley and in Cheshunt in Hertfordshire [8]; and his son, Sir Thomas Pengelly (1675-1730), Chief Baron of the Exchequer, descended from a west of England family, was son of Thomas Pengelly, by his wife Rachel, the eldest daughter of Lieutenant-colonel Jeremy Baines. He was probably born at his father's house 'next door to the 2 Twins in Moorefields,' and was baptised in...
Another 126 words (9 lines of text) are included under the topic Early Pengilly Notables in all our PDF Extended History products and printed products wherever possible.

Pengilly Settlers in Australia in the 19th Century

Pengilly Settlers in New Zealand in the 19th Century