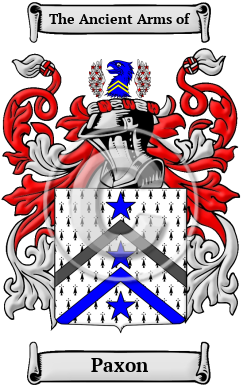 Early Origins of the Paxon family

The surname Paxon was first found in the ancient county of Berwickshire, now an administrative area of the Scottish Borders region, home of Paxton House, a historic house built between 1758 and 1766. This was the former seat of the Paxton family and is now open to the public as a Partner Gallery of the National Galleries of Scotland. Great Paxton and Little Paxton are villages in the ancient county of Huntingdonshire, now part of Cambridgeshire. Both villages have kept relatively small over the years, but trace back to the Domesday Book where they were listed as Pachstone and literally meant "farmstead of a man called Paecc" from the Old English personal name + tun. [1]

Early History of the Paxon family

This web page shows only a small excerpt of our Paxon research. Another 117 words (8 lines of text) covering the years 1296, 1304, 1350, 1400 and 1780 are included under the topic Early Paxon History in all our PDF Extended History products and printed products wherever possible.

Spelling variations of this family name include: Paxton, Paxson, Paxon and others.

Another 34 words (2 lines of text) are included under the topic Early Paxon Notables in all our PDF Extended History products and printed products wherever possible.

Paxon migration to the United States +

Paxon Settlers in United States in the 17th Century

Paxon Settlers in United States in the 19th Century