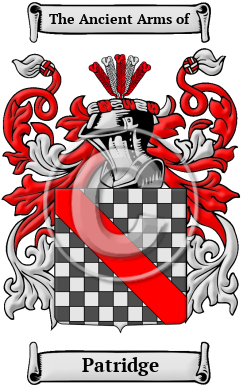 The name Patridge comes from one of the family having worked as a hunter or someone who caught partridges. Occupational names that were derived from the common trades of the medieval era transcended European cultural and linguistic boundaries. Occupational names have remained fairly common in the modern period. This is attested to by the continuing appearance of occupational suffixes at the end of many English surnames. Some of these suffixes include: herd, monger, maker, hewer, smith, and wright.

Early Origins of the Patridge family

The surname Patridge was first found in Kent. However, the parish of Miserden, Yorkshire tells an important story of the family's early lineage. "The manor of Wishanger, here, is of very ancient date, and was the seat of the Partriges, of whom William Partrige, of Cirencester and Wishanger, was summoned by the heralds at their first visitation of the county in the reign of Henry VIII.; from him the manor descended lineally for ten generations, and it was the principal seat of the family until the commencement of the present century, when it was sold. The manor-house, though partly taken down and otherwise injured, is still standing, as a farmhouse; the porch bears the arms of Partrige impaling those of Ernley of Wiltshire, on a large stone over the entrance, Robert Partrige having married into the Ernley family in the 16th century." [1]

Early History of the Patridge family

Spelling variations in names were a common occurrence before English spelling was standardized a few hundred years ago. In the Middle Ages, even the literate spelled their names differently as the English language incorporated elements of French, Latin, and other European languages. Many variations of the name Patridge have been found, including: Partridge, Pettridge, Patridge, Patrige, Partrich and others.

Distinguished members of the family include Peter Partridge (d. 1451), Chancellor of Lincoln Cathedral, was educated at Oxford University; and Sir Miles Partridge (d. 1552), English courtier, relative of William Partridge of Wishanger in Miserden, Gloucestershire. Sheriff of Gloucestershire (1546-1547.) He held the manor of Almondsbury in 1544. He was convicted of felony, and hanged on Tower Hill on Friday 26 Feb. 1551. John Partridge ( fl. 1566), was an English translator and...
Another 70 words (5 lines of text) are included under the topic Early Patridge Notables in all our PDF Extended History products and printed products wherever possible.

Patridge migration to the United States +

Families began migrating abroad in enormous numbers because of the political and religious discontent in England. Often faced with persecution and starvation in England, the possibilities of the New World attracted many English people. Although the ocean trips took many lives, those who did get to North America were instrumental in building the necessary groundwork for what would become for new powerful nations. Among the first immigrants of the name Patridge, or a variant listed above to cross the Atlantic and come to North America were :

Patridge Settlers in United States in the 17th Century

Patridge Settlers in United States in the 18th Century

Patridge Settlers in New Zealand in the 19th Century