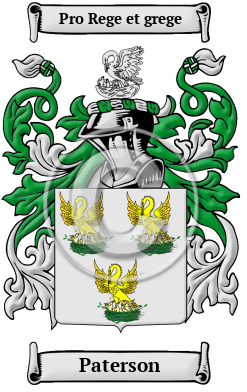 Early Origins of the Paterson family

The surname Paterson was first found in Ross-shire (Gaelic: Siorrachd Rois) a former county, now part of the Council Areas of Highland and Western Isles in Northern Scotland, which emerged from the Gaelic lordship of the Earl of Ross. The ancestral home of the Clan Pheadirean (Patersons) was on the north side of Lochfyne. Moving from the Gaelic into English spellings resulted in the typical wide range of surname spellings. By example, William Patrison and John Patonson, a 'gentillmen,' were witnesses in Aberdeen in 1446, Donald Patyrson was admitted burgess of Aberdeen in 1494, Robert Patersoun was 'capitane of ane were schip of Dundee' in 1544, Fyndlay Patersoun had a tack of the lands of Owar Elrik from the Abbey of Cupar in 1557, and so on. [1]

Early History of the Paterson family

The translation of Gaelic names in the Middle Ages was not a task undertaken with great care. Records from that era show an enormous number of spelling variations, even in names referring to the same person. Over the years Paterson has appeared as Patterson, Paterson, Pattersen, Patteson, Pattison and many more.

Notable amongst the Clan from early times was John Paterson (1604-1679), Bishop of Ross; John Paterson (1632-1708), the last Archbishop of Glasgow, Bishop of Galloway, Bishop of Edinburgh; and William Pattison (1706-1727), an English poet. Sir William Paterson (1658-1719), a Scottish trader and banker, one of the founders of the Bank of England. One story claims "he came from Scotland...
Another 59 words (4 lines of text) are included under the topic Early Paterson Notables in all our PDF Extended History products and printed products wherever possible.

Migration of the Paterson family to Ireland

Some of the Paterson family moved to Ireland, but this topic is not covered in this excerpt.
Another 75 words (5 lines of text) about their life in Ireland is included in all our PDF Extended History products and printed products wherever possible.

Paterson migration to the United States +

Many of the ancestors of Dalriadan families who arrived in North America still live in communities along the east coast of Canada and the United States. In the American War of Independence many of the original settlers traveled north to Canada as United Empire Loyalists. In the late 19th and early 20th centuries the ancestors of many Scots began recovering their collective national heritage through Clan societies, highland games, and other patriotic events. Research into the origins of individual families in North America revealed records of the immigration of a number of people bearing the name Paterson or a variant listed above:

Paterson Settlers in United States in the 17th Century

Paterson Settlers in United States in the 18th Century

Paterson Settlers in United States in the 19th Century

Paterson Settlers in United States in the 20th Century

Paterson Settlers in Canada in the 19th Century

Paterson Settlers in Australia in the 19th Century

Paterson Settlers in New Zealand in the 19th Century

Historic Events for the Paterson family +