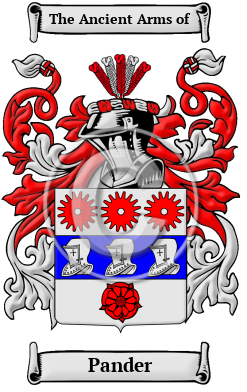 The Pander surname is derived from the Middle English/Old French word "panetier" and was an occupational name from the office of master-baker. "In the court of France the Pantier was an officer of high consideration; and in monasteries the Pantier was charged with the distribution of bread to the poor. " [1]

Early Origins of the Pander family

The surname Pander was first found in Angus (Gaelic: Aonghas), part of the Tayside region of northeastern Scotland, and present day Council Area of Angus, formerly known as Forfar or Forfarshire, where they held a family seat from early times and their first records appeared on the census rolls taken by the ancient Kings of Britain to determine the rate of taxation of their subjects.

Early History of the Pander family

Notable amongst the family at this time was Andrew Panter, Keeper of the King's Mint; Patrick Paniter (born c. 1470 - 1519) Scottish churchman and principal secretary to...
Another 28 words (2 lines of text) are included under the topic Early Pander Notables in all our PDF Extended History products and printed products wherever possible.

Pander migration to the United States +

Pander Settlers in United States in the 17th Century

Pander Settlers in United States in the 19th Century