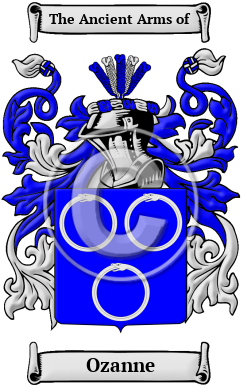 Noble surnames, such as Ozanne, evoke images of the ancient homeland of the French people. The original bearer of the name Ozanne, which is a local surname, once lived, held land, or was born in the beautiful Guyenne region of France. In France, hereditary surnames were adopted according to fairly general rules and during the late Middle Ages, names that were derived from localities became increasingly widespread. Local names originally denoted the proprietorship of the village or estate. The Ozanne family originally lived in the village of Loison.

Early Origins of the Ozanne family

The surname Ozanne was first found in Guyenne where they held a family seat in the seigneurie of Caumont.

Antoine Nompar de Caumont, Duke of Lauzun, 1632-1723, who was a Lord at the Court of Louis XIV, was under house arrest for 10 years at Pignerol. During the French Revolution the Duke of Lauzun was Constable General and Marshal of France and acted as an agent between Duke de Biron and the Duke of Orléans and Mirabeau.

Gilles Lauzon, born in 1631, son of Pierre and Anne (née Boivin), travelled from Normandy (French: Normandie) to Canada in The Great Recruitment of 1653. After arriving in Quebec he married Marie Archambault, daughter of Jacques and Françoise (née Toureau), in Montreal on 27th November 1656. They remained there together until Gilles passed away on 21st September 1687. [1]

Early History of the Ozanne family

This web page shows only a small excerpt of our Ozanne research. Another 62 words (4 lines of text) covering the years 1583, 1666, 1651, 1657, 1631 and 1687 are included under the topic Early Ozanne History in all our PDF Extended History products and printed products wherever possible.

Notable amongst the name was Duke of Lauzun, Marshall of France; Jean de Lauzon or de Lauson (1583-1666), French Governor of New France from 1651 to 1657...
Another 27 words (2 lines of text) are included under the topic Early Ozanne Notables in all our PDF Extended History products and printed products wherever possible.

Ozanne migration to the United States +

Ozanne Settlers in United States in the 18th Century

Ozanne Settlers in Australia in the 19th Century