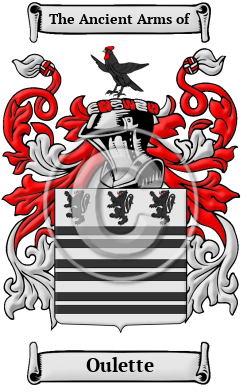 Of all the French names to come from Normandy, Oulette is one of the most ancient. The name is a result of the original family having lived at a place in Normandy, called Ouilly-le-Basset in the arrondissement and canton of Falaise in Calvados. The name is adapted from the French word "oeil," meaning "eye," which was used metaphorically to refer to the source of a spring or fountain. [1]

Early Origins of the Oulette family

The surname Oulette was first found in Normandy (French: Normandie), the former Duchy of Normandy, where this distinguished family held a family seat in the honor of the seigneurie of Ouilly-le-Basset in the arrondissement and canton of Falaise in Calvados.

Of this family Robert D'Ouilli, the son of Foque D'Aulnay, who was descended from D'Alnay, the first Duke of the Normans of Loire 895-905, joined Duke William of Normandy in the Conquest of England in 1066 A.D. He is referred to by Wace, the chronicler of the Battle of Hastings, as "E cil d'Ouillie," and received the castle of Wallingford in 1067 and possessed sixty-one manors with forty-two habitable houses in the county of Oxford of which he was the Constable.

Wallingford was an ancient Roman castle and Robert D'Ouillie, at the command of William the Conqueror, rebuilt the castle in the Norman style, an impregnable edifice which would play a most significant part in history. He gave much of his estates to Roger D'Ivri, his sworn brother in Arms. This Robert also ceded to Roger his Barony of St. Valery.

René Ouellet, born in 1642, son of François and Elisabeth (née Barre), was one of the first people found in Canada with the name Ouellet. René first married Anne Rivet on 8th March 1666 and he later married Thérèse Mignot on 6th February 1679. Throughout his two marriages René had six sons that carried on the family name of Ouellet. René was buried on 15th January 1722 in Sainte-Anne-de-la-Pocatière, Quebec. [2]

Early History of the Oulette family

This web page shows only a small excerpt of our Oulette research. Another 46 words (3 lines of text) covering the years 1066 and 1067 are included under the topic Early Oulette History in all our PDF Extended History products and printed products wherever possible.

The many different spellings of French surnames can be partially explained by the use of local dialects and by the influence of other languages during the early development of the French language. As a result of these linguistic and cultural influences, the name Oulette is distinguished by a number of regional variations. The many spelling variations of the name include Oueilly, Oueilly, Ouilly, Ouele, Oueillade, Willet, Willett, Williot, Wille, Willette, Willi, Oulette, Ouellet, Oullett, Wellett, Oullette and many more.

More information is included under the topic Early Oulette Notables in all our PDF Extended History products and printed products wherever possible.

Migration of the Oulette family

France finally gave land incentives for 2,000 migrants during the 1700s. Early marriage was encouraged in New France, and youths of 18 took fourteen-year-old girls for their wives. The fur trade was developed and attracted migrants, both noble and commoner from France. 15,000 explorers left Montreal in the late 17th and 18th centuries, leaving French names scattered across the continent. The search for the Northwest passage continued. Migration from France to New France or Quebec, as it was now more popularly called, continued until 1759. By 1675, there were 7000 French in Quebec. By the same year the Acadian presence in Nova Scotia, New Brunswick and Prince Edward Island had reached 500. In the treaty of Utrecht, the Acadians were ceded by France to Britain in 1713. In 1755, 10,000 French Acadians refused to take an oath of allegiance to England and were deported. They found refuge in Louisiana. Meanwhile, in Quebec, the French race flourished, founding in Lower Canada, one of the two great solitudes which became Canada. Many of this distinguished family name Oulette were prominent in social, cultural, religious and political affairs in France and New France. Amongst the settlers in North America with this distinguished name Oulette were Grégoire Ouellet, who settled at Riv. Ouelle, Canada in 1696; Alexandre Ouellet, who settled in Canada in 1781; Alexis Ouellet, who settled at Riv. Ouelle, Quebec in 1784.