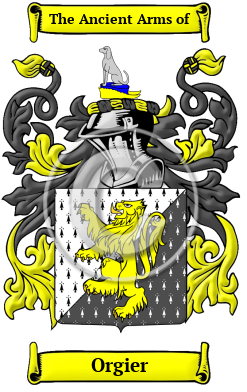 The name Orgier is Anglo-Saxon in origin. It was a name given to a person who makes or sells stockings and socks. The surname Orgier is derived from the Old English word hosa, which means hose. [1] This passage may be interesting to the reader: "The hosier of modern times sells stockings and other soft 'under clothing.' Two hundred years ago, [1600's] the hosiers of London were those tailors who sold ready-made clothes; but the original hosier was he who encased the 'nether man' in leather, covered both the foot and leg, and was called a hose. " [2]

Early Origins of the Orgier family

The surname Orgier was first found in Oxfordshire, where William Husier was registered in Oseney in 1180. Years later, Clerkenwell records in London revealed John le Husier living there 1182-1187 and later, Nicholas, You le hosier was listed in the Pipe Rolls for Yorkshire in 1197. The Curia Regis in Sussex show Alexander le Hoser there in 1200. [3]

The Writs of Parliament mention Philip le Hosier, c. 1300 and later, the Yorkshire Poll Tax Rolls include Thomas Hosyer as holding land there at that time. [1]

Early History of the Orgier family

Until the dictionary, an invention of only the last few hundred years, the English language lacked any comprehensive system of spelling rules. Consequently, spelling variations in names are frequently found in early Anglo-Saxon and later Anglo-Norman documents. One person's name was often spelled several different ways over a lifetime. The recorded variations of Orgier include Hosier, Hozier and others.

Distinguished members of the family include Edward Hosier (c.1506-1571), an English politician, Member of the Parliament for Shrewsbury in 1545; John Hosier, commander of the Magdalen a merchant ship in the service of the parliament in 1642-1650; and Vice-Admiral Francis Hosier (1673-1727) of Deptford. He was born at Deptford, and baptised at St. Nicholas Church there 15 April 1673, was son of Francis Hosier, clerk of the cheque at Gravesend and agent victualler at Dover. He was possibly related to John Hosier, who commanded the Magdalen merchant ship in the parliament's service 1642-1650 . " In 1720 and again in 1721...
Another 246 words (18 lines of text) are included under the topic Early Orgier Notables in all our PDF Extended History products and printed products wherever possible.

Migration of the Orgier family

Thousands of English families boarded ships sailing to the New World in the hope of escaping the unrest found in England at this time. Although the search for opportunity and freedom from persecution abroad took the lives of many because of the cramped conditions and unsanitary nature of the vessels, the opportunity perceived in the growing colonies of North America beckoned. Many of the settlers who survived the journey went on to make important contributions to the transplanted cultures of their adopted countries. The Orgier were among these contributors, for they have been located in early North American records: ??? Hosier who sailed to Virginia in 1623; Samuel Hosier to Salem, Massachusetts in 1630; Thomas Hosier to Maryland in 1718; Ann Hosier to Virginia in 1732.